How does bureaucracy matter for state capacity and development? Over the last years, enormous interest in this question has created a large body of research, mostly focused around evidence from field experiments and micro-level administrative data. This blog reviews this recent literature and embeds it in the broader discussion on how bureaucracies contribute to economic development. We argue that this recent evidence matters, but we also encourage future research to study bureaucracies as systems and to analyze their systemic relations to politics, citizens, firms, and NGOs.

The seminal work on the role of institutions (Acemoglu and Robinson 2012) and state capacity (Besley and Persson 2011) has strengthened the paradigm that effective states are central to economic development. At the same time, whether and how having an effective bureaucracy supports development is an open question.

Historical accounts and empirical evidence support the claim that bureaucratic effectiveness and economic development are strongly correlated. And narrative evidence by historians and political scientists fuels the idea that establishing an effective bureaucracy has been vital to the development of modern nation-states, particularly around functions such as national defense (Tilly 1985) and taxation (Levi 1988, Migdal 1988).

One of the most prominent early examples of a professional bureaucracy are the Chinese mandarins that were, for more than a millennium up to 1905, selected by a rigorous system of imperial examinations. Chen, Kung, and Ma (2020) have shown that this system has positive human capital effects even until today. Much later, many European states emulated this example and established professionalized civil services in an effort to build state capacity. A case in point in the UK was the Northcote-Trevelyan report of 1854, which led to the introduction of competitive exams for entry into the national civil service, alongside promotions via fair and transparent rules, and the establishment of a permanent “home civil service”. Similar rules were established in the US with the 1883 Pendleton Act, which was instrumental in the rise of the modern state in the US (Van Riper 1958). More recently, the East Asian miracle has often been regarded as a paragon for building state effectiveness to promote economic development (Wade 1990, Evans 1995). Several state institutions, such as Japan’s Ministry of International Trade and Industry and South Korea’s Economics Planning Board have gained particular attention for being selective, highly efficient institutions that played an essential role in industrial development (Johnson 1982; Cheng, Haggard, and Kang 1998).

A glance at the facts

These historical accounts clearly suggest that bureaucracies matter for economic development. We get a window on the global importance of bureaucracies using cross-country evidence, in the spirit of Evans and Rauch (1999). We use a composite bureaucracy score ranging from 0 to 1 from the Varieties of Democracy (V-Dem) project and relate this to economic development in 2016. Figure 1 shows for every level of GDP per capita, the lowest composite bureaucracy score among all countries that have at least that level of GDP (excluding oil-exporting countries). Not a single country that has reached high-income status had a bureaucracy score below the mean of the data. In other words, there are no high-income countries that have not also built effective bureaucracies by this measure. When we look at the relationship between specific components of bureaucratic quality and economic growth, we find that within countries, more meritocratic recruitment of bureaucrats was also associated with significantly higher economic growth over the post-war period. But such cross-country patterns are, at best, suggestive and certainly cannot support causal claims. 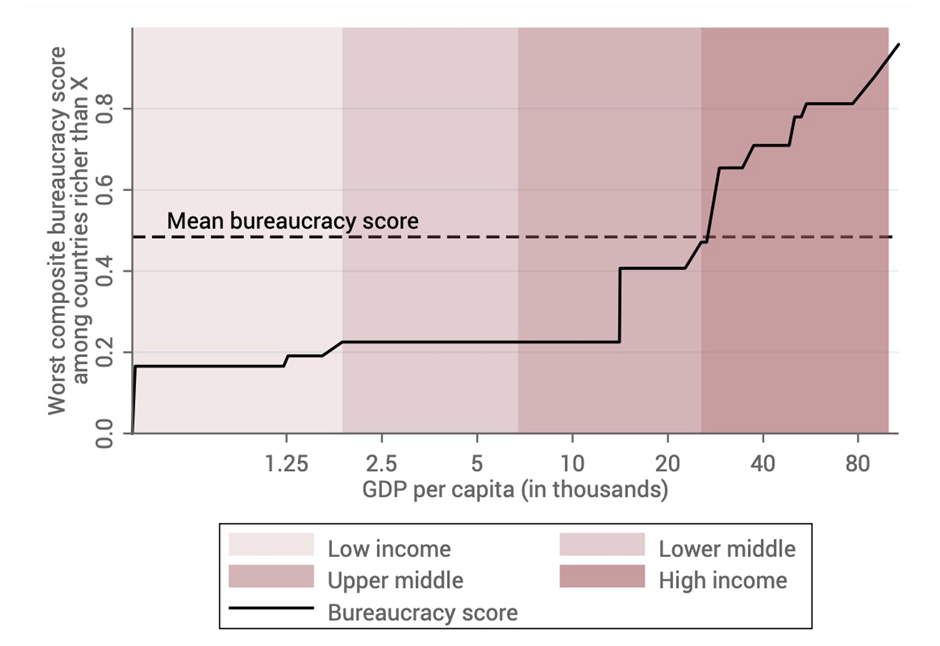 Figure 1: For every level of GDP per capita, the figure shows the lowest composite bureaucracy score among all countries that have reached at least that level of GDP.

To understand how bureaucracy affects state capacity and development, a growing literature has studied bureaucracy at a more micro level, breaking it down into specific parts and studying, in particular, issues of selection and incentives. Many experimental studies have used RCTs to aid in identifying causal mechanisms behind interventions.

The first-order challenge for this microeconomic literature has been the measurement of performance. This is difficult because organizational goals in the public sector are often very broad, multi-dimensional, and hard to verify or attribute to specific bureaucrats. Most commonly, studies have analyzed clearly defined, measurable tasks, often restricting the analysis to specialized lower-tier civil servants. Another set of papers has followed the CEO literature (Bertrand and Schoar 2003) to map individuals with more power to aggregate outcomes (Gulzar and Pasquale 2017, Jia 2017, Xu 2018). A more recent strand of the literature has used subjective performance measures generated from internal reports (Rasul and Rogger 2018, Limodio 2021) or assessment surveys (Bertrand et al. 2020). An important takeaway from this work is that the focus on straightforwardly measurable outcomes has limited studies to quite specific topics and settings.

A natural lever for improving bureaucratic output is the greater use of incentives. These can be monetary (performance pay, promotions, firing) or non-monetary (prestige, image concerns). A substantial body of research has attempted to understand how such incentives affect bureaucratic performance. For example, compensation schemes based on student performance have been shown to create undesirable incentives for teachers (Glewwe, Ilias and Kremer 2010, Neal and Schanzenbach 2010). The role of performance-based promotions and relocations has been studied in various contexts (Bertrand et al. 2020, Jia 2017, Khan, Khwaja, and Olken 2019). Recent fieldwork in Pakistan has also shown how incentives affect performance in multi-tasking settings (Khan, Khwaja, and Olken 2016). Another powerful incentive is mission motivation – bureaucrats are often intrinsically motivated and care about their impact even if their compensation is not tied to it (Ashraf and Bandiera 2018, Besley and Ghatak 2018, Bénabou and Tirole 2006). Khan (2020) provides experimental evidence from healthcare workers in Pakistan that mission emphasis increases performance and improves outcomes even on dimensions that were not explicitly incentivized.

Other literature has studied the selection of bureaucrats. One important question addressed is how to attract qualified and motivated individuals for work in the public sector – this work is mostly experimental and focuses on front-line workers (Dal Bó, Finan, and Rossi 2013, Deserranno 2019, Ashraf and Bandiera 2018). A different strand of work studies the selection process itself, comparing how rule-based selection, such as competitive entry exams, changes outcomes compared to discretionary political appointments.

Bureaucracies are large multi-layered organizations performing a large variety of complex, multi-faceted tasks. We argue that research needs to understand how micro-level mechanisms can be aggregated to the organization-level, effectively moving the “personnel economics” (Finan, Olken, Pande 2017) to an “organizational economics of the state”.

The first research agenda related to this is how tasks are coordinated within bureaucracies. This naturally follows the literature on the organizational design of large firms (Chandler 1977, Qian, Roland, and Xu 2006). An important question in this respect is whether bureaucracies should be hierarchically coordinated or decentralized. Studying these mechanisms could also help policymakers to understand how the insights of individual studies on selection and incentive mechanisms can be scaled up to the bureaucracy as a whole.

The relationship between bureaucracy and politics is another crucial aspect of understanding the formation of state capacity. While politicians are typically accountable to the citizens they serve, bureaucrats are accountable to politicians, creating a principal-agent relationship with the significant inherent tension between politicians and – often more specialized – bureaucrats. This creates the potential for the politicization of the bureaucracy via political appointments and transfer decisions (Iyer and Mani 2012, Spenkuch, Teso and Xu 2021), especially because the line between politics and bureaucracy is often not clear cut.

Since firms are important drivers of economic growth, understanding their interactions with the state and bureaucracy that regulates them is vital. The seminal work of Evans (1995) discusses the relationship between state and civil society in the context of industrial development. According to his work, the most successful state is closely linked to civil society. This can have the positive effect that bureaucracy can use the valuable information provided by firms to implement better regulation (Leff 1964, Bardhan 2017). On the other hand, firms can also capture the state (Stigler 1971, Peltzman 1976, Bates 1981). The empirical literature on this topic (Frye and Shleifer 1997, Hellman, Jones, and Kaufmann 2003, Brown, Earle, and Gehlbach 2009) does not always clearly delineate the roles of bureaucrats and politicians when it comes to discussions of state capture.

Finally, it is also important to understand the role of NGOs. NGOs may act as interest groups, trying to influence the outcomes of bureaucratic regulation. In addition, particularly in many developing countries, NGOs often provide public services in place of the government, an issue studied theoretically by Besley and Ghatak (2001) and Hart, Shleifer, and Vishny (1997). In fragile countries, service delivery through international NGOs may have positive short-term effects, but prevent the formation of state capacity in the long run (​Commission on State Fragility, Growth and Development 2018). Understanding how these interdependencies can be used while also creating a successful state is an interesting avenue for future research.

Over the last decade or so, the substantial body of research on personnel economics of the state and on bureaucratic reforms has produced valuable evidence. We argue that a transition from the study of microeconomic phenomena toward understanding larger, more complex mechanisms is an important next step to fully grasping how effective bureaucracies support development. To this end, we suggest three research agendas: First, gathering economy-wide micro-data to evaluate system-wide reforms would enable researchers to better study structural transformations. Recent progress in deploying large datasets, particularly administrative data, makes us optimistic that this is possible. Second, understanding how politics and the bureaucracy interact to generate state capacity has largely been ignored but seems important given the unavoidable interactions and interdependencies between the two. Third, the examples of structural transformation in China and East Asia show that studying the relationship between the private sector and bureaucracy requires closer attention. Whether bureaucracies can innovate and adapt to future challenges will have important economic implications – we hope that future research will help tackle these challenges.

Adnan Khan is Professor in Practice at the School of Public Policy, London School of Economics and Political Science

Jonathan Old is a Ph.D. student in Economics at UC Berkeley