While the typical person walking the streets of Pakistan may have taken off their mask and the news media may have moved on from discussing the economic impacts of COVID-19, data shows that the economic distress caused by the pandemic is far from over. In the viral wake of Covid-19, Pakistan experienced a negative growth rate of -0.4% instead of the 3.2% (projected prior to the outbreak of the pandemic), according to the Asian Development Bank. This economic slowdown is likely to have dented the gains made on poverty reduction over the last decade. In addition, given the nature of the shock, it is likely to have disproportionately impacted households that were already financially fragile.

This blog seeks to examine the impacts of COVID-19 as well as the heterogeneity in patterns of recovery, based on the Economic Vulnerability Assessment (EVA). The EVA is a phone survey, conducted by CERP, which examines the economic impact of COVID-19 on households in Punjab. The first and second rounds were conducted in June/July and September/October, 2020, respectively. More details on the methodology, sampling and results can be found here. Overall results show that while there has been a partial economic recovery, certain groups such as people living in rural areas and those with lower levels of education continue to remain vulnerable.

There has been a robust recovery in employment across both urban and rural areas. The percentage of respondents who have lost their jobs has decreased from 22.9% in Round 1 to 5.5% in Round 2. Further the 21% of respondents report being unemployed in Round 2 in both rural and urban areas, compared with 34.5% of urban respondents and 31.6% of rural respondents in Round 1. 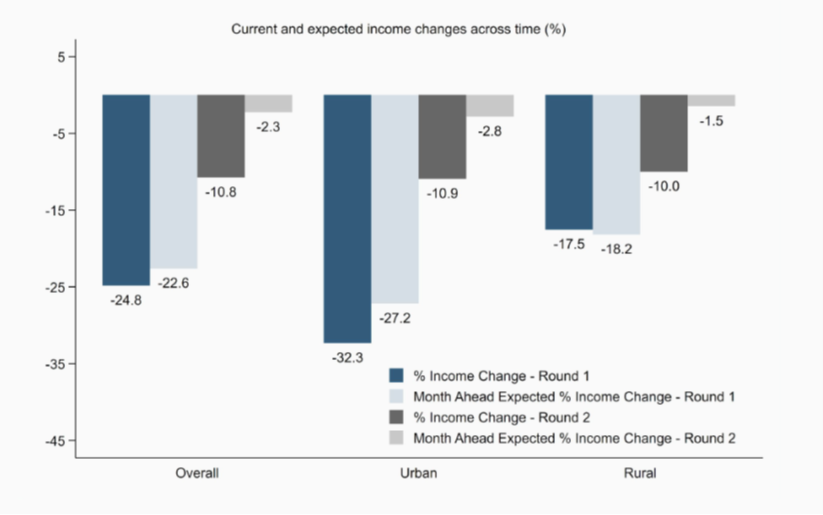 Income levels in August 2020 were still below February 2020 levels, though have improved substantially since May 2020: average incomes (see Figure 1) decreased by 25% in Round 1 (between February 2020 and May 2020) and 11% in Round 2 (between February 2020 and August 2020). However, the recovery patterns differ across urban and rural areas: the urban areas, which were also initially harder hit have seen a much greater recovery (with a 22% change) compared to rural areas (only a 7.5% change), where recovery has been much slower (see Figure 1). 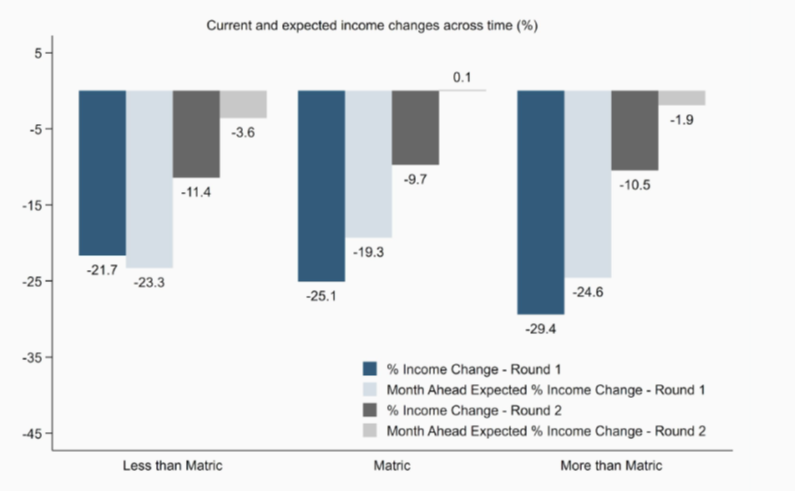 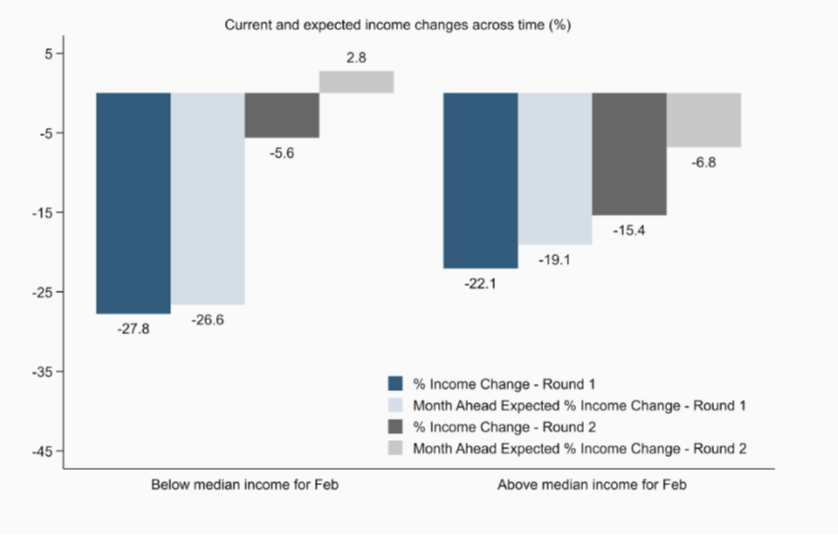 It is notable that households with incomes below the sample median (in February 2020) were more likely to see income recover (see Figure 3). However, the share of households at the margin of poverty (earning less than Rs. 17,500 per month) remains high and largely unchanged, at around 70%. Figure 3 also shows that respondents from both groups (below and above median in February 2020) expect significant increases in income in the next month, relative to their incomes in August. 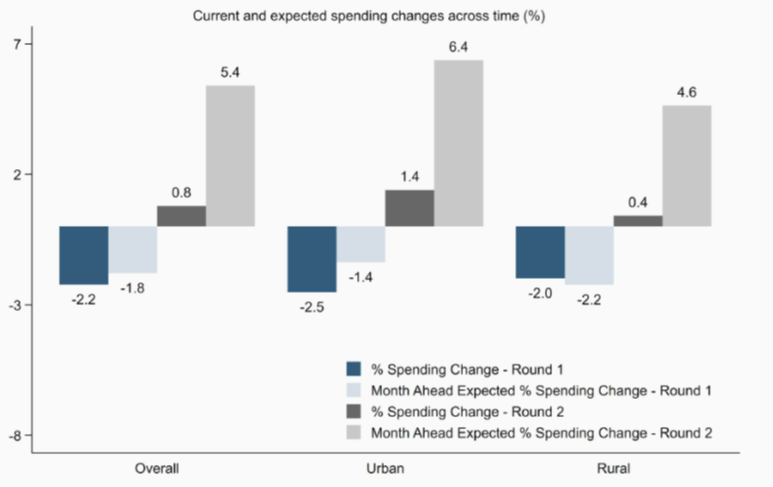 While income recovery has been slow and incomplete, spending has completely recovered and increased beyond the pre-covid level (Figure 4). Households also expect spending to continue to grow in the short term (by 5.4% in the next month). The impacts on spending do not differ systematically between rural and urban areas.

A third of households (27.5%) have missed at least one monthly payment in Round 2, and 30.3% expect to miss a payment in the next month. This is a sharp improvement from 48% of households missing at least one payment in Round 1. Loan payments and ration store payments are the two important categories in which there has been very little recovery in terms of likelihood of missing payments. particularly in rural areas where about 26% of individuals report having missed ration store payments in Round 2. Missed ration payments in rural areas can pose a threat to food security in these areas as well.

In round 2, fewer households have reported borrowing (23.2%, down from 33.9% in round 1). Of those who borrowed money, 76.6% did so from family or friends in Round 2. Conditional on having borrowed, on average, the amount borrowed is 244% of the February 2020 income. This, combined with people missing loan payments, can have serious consequences for economic well-being of these individuals.

Food insecurity has also decreased overall since round 1, but remains high in the rural areas (Figure 5). Around half of households (51%) in Round 2 and 46% in Round 1 report making some compromise on food, including relying on less expensive food items, going to bed hungry, reducing the size of meals, or relying on friends/relatives or donations for food.

The proportion of households being unable to buy essential food items in the past week decreased from 17.2% in Round 1 to 12.7% in Round 2. Despite the recovery, those in rural areas and those with below median February income remain vulnerable to food insecurity (Figure 5). When asked about the reasons for this food insecurity, 87% reported a lack of resources (not enough money), and 53% of these households reported that food items were more expensive than usual as factors driving their inability to buy essential food items.

In short, while economic outcomes have generally improved in round 2, when compared to round 1, they remain below early-2020 levels in most cases. In addition, the recovery has been quicker in urban areas, where the initial impact was also more pronounced. Lower-income and lower-skilled households have also seen slower recovery. Policies that are targeted may be more useful in expediting the recovery process.

Saher Asad is an Assistant Professor at the Lahore University of Management Sciences.

Javaeria Qureshi is an Associate Professor at the University of Illinois, Chicago.

Taimur Shah is the Associate Director at CERP Lab.

Basit Zafar is a Professor at the University of Michigan