COVID-19 is a health pandemic with economic consequences whose severity cannot be underestimated. Yet there is limited understanding of the pandemic’s effects on the economic lives of citizens. We address this gap using the Pakistan Bureau of Statistics’ Special Survey for Evaluating the Socio-Economic Impact of COVID-19; a nationally representative survey that is also representative of rural and urban areas. This analysis provides important lessons for government policy during the lethal third wave.

Like other countries, Pakistan has had to balance the health and economic consequences of the pandemic. However, it has escaped the high death rates seen across its borders (Figure 1). 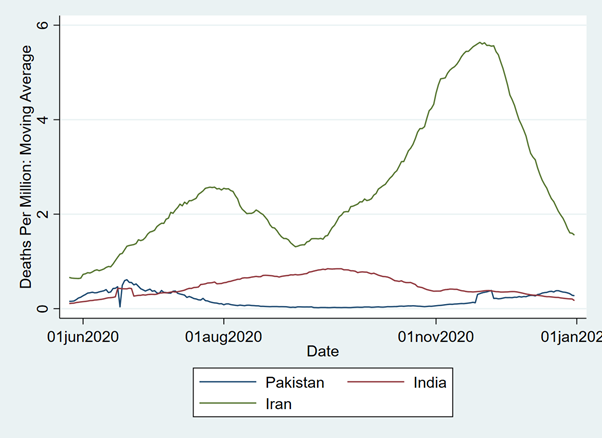 Its main challenge has been to manage the stress on its health capacity. Its healthcare system saw a rising burden during the first wave (April-July 2020) (Figure 2) that forced the government to introduce stringent lockdowns. After a somewhat puzzling period of respite and a short second wave (October 2020-January 2021), it has been experiencing a lethal third wave since that has prompted the government to enforce another round of stringent lockdowns. 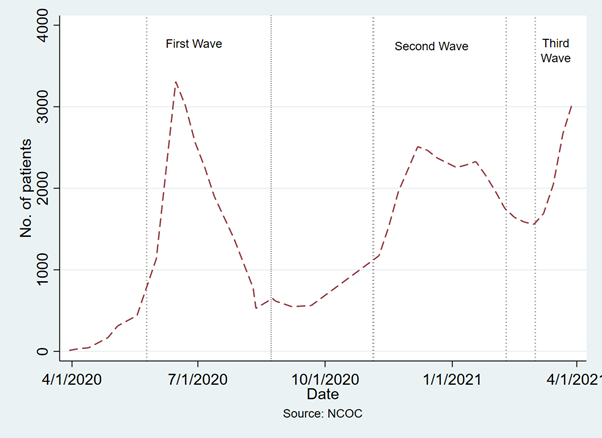 Figure 2: Patients on ventilators and oxygen in Pakistan’s hospitals

The PBS survey provides information on employment, income, and access to social assistance at the individual and household levels for the pre-lockdown period (January-March 2020), the first wave lockdown (April-July 2020) and the post-lockdown (October-November 2020) period prior to the second wave. We use this information to analyze the economic effects of the pandemic.

The economic consequences of the first wave

The evidence shows that Pakistani citizens experienced an unprecedented shock because of lockdowns during the first wave. We find that the unemployment rate increased by 34.1% between the pre-lockdown and the first wave lockdown periods and mean income fell by over 42%. 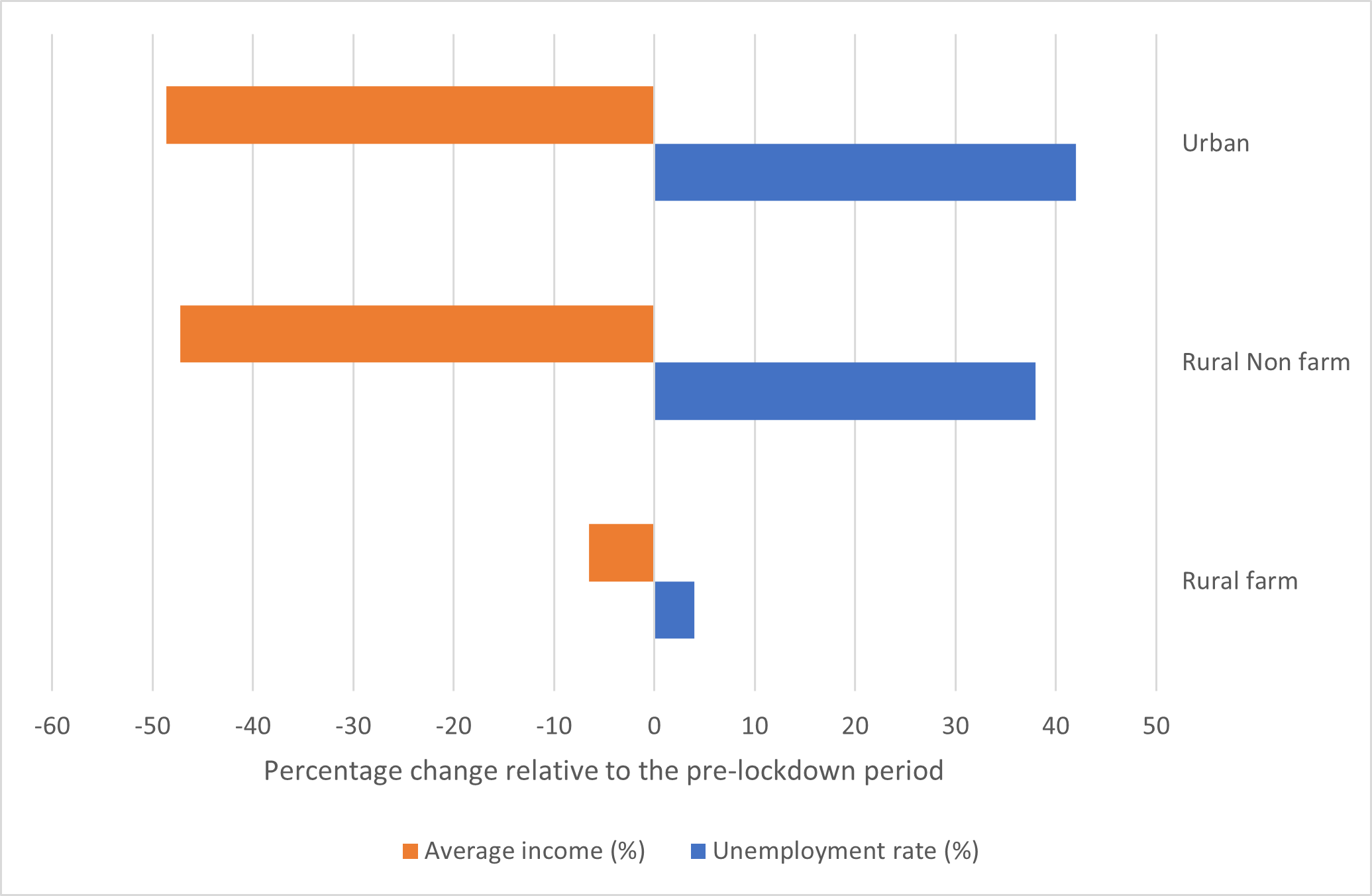 Figure 3: The change in unemployment rate and average income during the first wave lockdowns by type of respondent

The PBS survey shows that the biggest loss of income and jobs was experienced by causal labour, however employers and the self-employed also experienced a sizeable shock. We find that households in the bottom three asset quintiles faced a larger income shock than households in the upper two quintiles. Households adjusted to this shock by consuming a lower quantity and quality of food products (50% of the sample), cutting back on non-food expenditure (54%) and running down savings or doing distress sales of assets (47%) As undernutrition increases the risk of disease and lack of assets is a correlate of poverty, it is important to track the long-run welfare consequences of this shock on citizen welfare.

Recovery after the first wave lockdown

The summer of 2020 brought with it a period of respite from the pandemic that allowed the government to avoid further large-scale lockdowns until the second and third waves. Did this result in a complete recovery to pre-lockdown levels?

There is no doubt that the period of respite after the first wave resulted in robust recovery for citizens (Figure 4). However, the recovery has been incomplete. We find that around 3 million citizens were unable to recover their jobs a quarter after the end of first wave lockdowns and average income in November 2020 remained 5.5% below its pre-lockdown level. 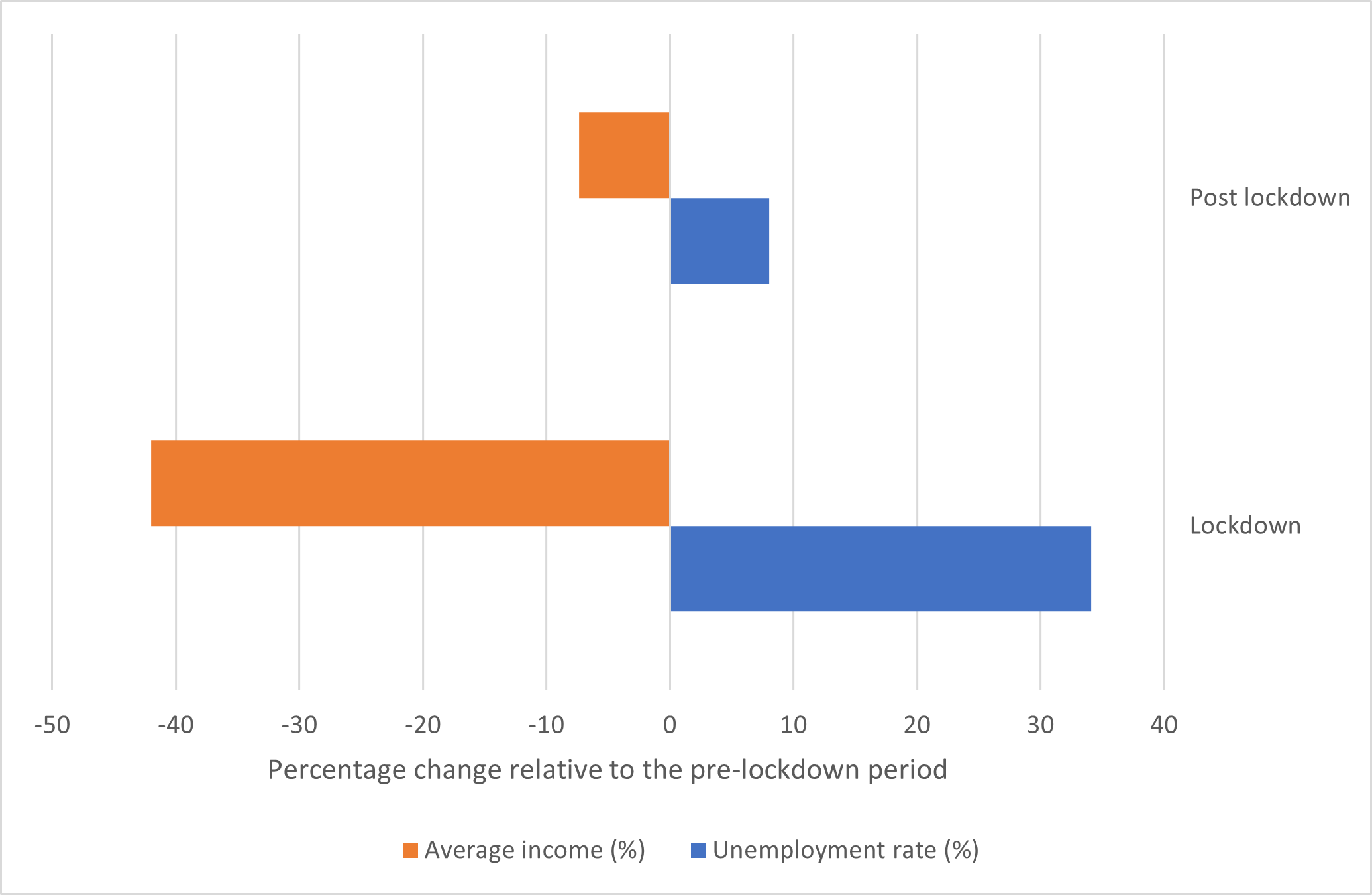 Source: PBS 2021
Figure 4: The change in unemployment and average income during the first wave lockdowns and subsequent opening up.

This is of concern for two reasons. First, existing data does not capture the effect of lockdowns imposed during the second and third waves. It is likely that these lockdowns have impeded or reversed the gains made during the period of respite. Second, an incomplete recovery a quarter after the end of the first wave lockdowns raises concerns that the rate of structural unemployment may have increased.

Hence, it is important to track changes in employment and income trends at the household level to assess the risks attached to these concerns. The Centre for Economic Research in Pakistan (CERP)’s Economic Vulnerability Assessment, a panel survey of households in the Pakistani Punjab, is an invaluable resource to track these trends. A follow up survey by PBS at the national level is also needed.

How effective was social assistance as a safety net against the shock?

TThe government responded to the first wave lockdowns by institutionalizing the Ehsaas Emergency Cash transfer program as early as April 2020 and committed to providing social assistance to 15 million families. The Ehsaas program was complemented by provincial programs and there are reports of community level efforts to provide social assistance. How effective was this assistance in insuring households against the economic shock?

Figure 5 shows the percentage of PBS sample households who lost income prior to the second wave and those who benefited from government and any form of social assistance by asset quintile during the survey period. The asset index is based on answers to the PBS COVID survey’s durable assets module and is constructed by applying principal component analysis. The data shows that loss of income effected a majority of households across all asset quintiles. While government assistance disproportionately targeted asset-poor households – in line with policy – the coverage of social assistance was insufficient to insure a sizable proportion of households against loss of income. This is likely to have made the households in the bottom three asset quintiles particularly vulnerable because unlike the rich they lack sufficient savings to insure themselves against the shock. 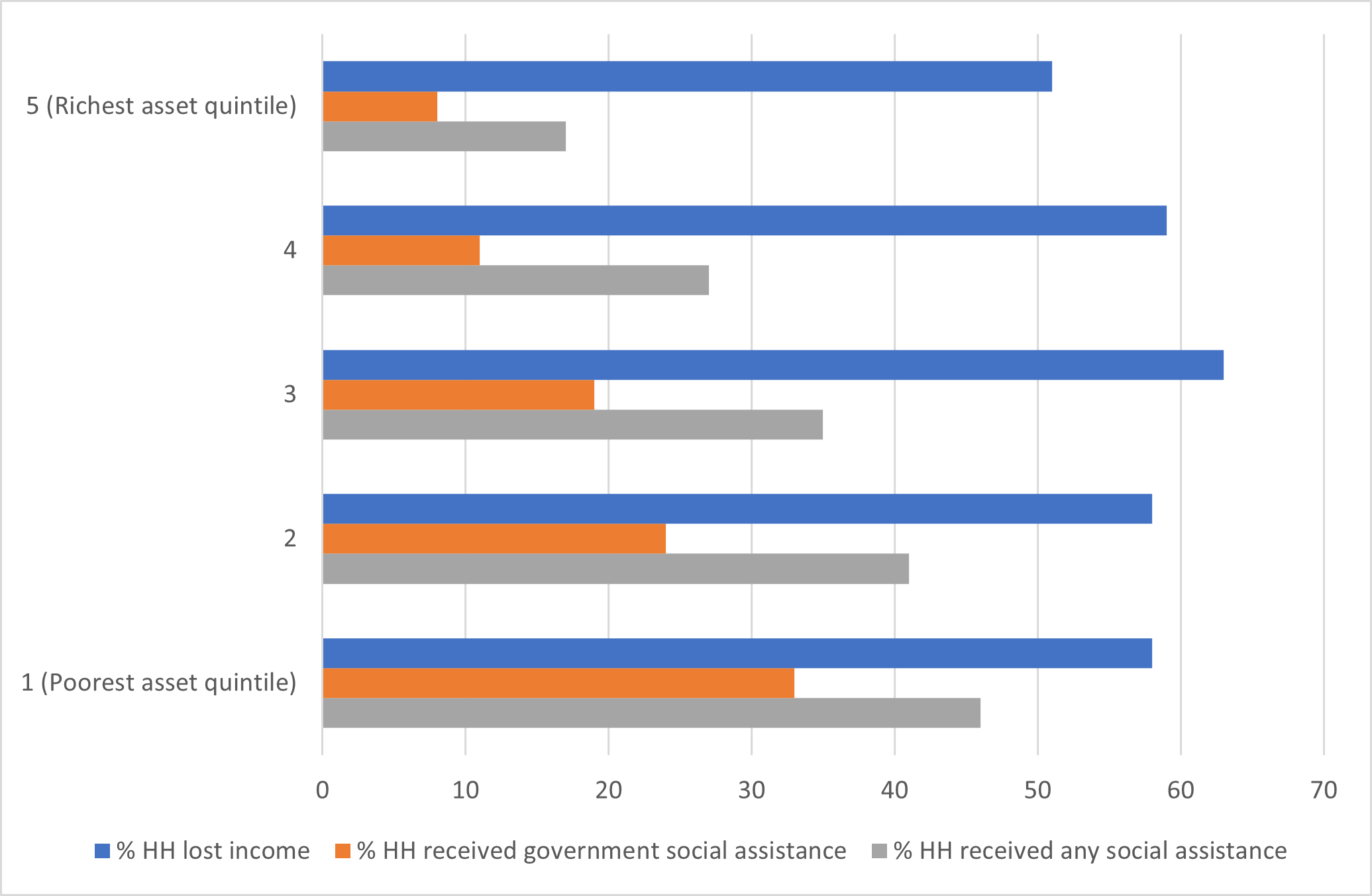 Source: PBS 2021
Figure 5: Percentage of households who lost income and received social assistance during the pandemic prior to the second wave in November 2020

Lessons from the first wave

An important lesson from the first wave is that there are large livelihood costs associated with even short duration lockdowns in low-income economies. Development economists had alerted the world to these livelihood concerns and recommended avoiding large-scale lockdowns (Barnett-Howell and Mobarak, 2020; CERP, 2020; PIDE, 2020). The government’s instinct was right in this regard. Although, Pakistan’s low infection rates allowed it to avoid making the hard choice between closing the economy and reducing the burden on health services except for short periods.

Pakistan’s lethal third wave has, however, made it clear that the government will need to keep coming back to this ‘hard choice’ unless actions are taken to overcome the pandemic. The key to this is an expeditious roll out of the vaccine program. However, this is currently plagued by serious supply and demand side bottlenecks. Pakistan’s current supply commitments are insufficient to ensure herd immunity. Evidence shows that vaccine hesitancy is a problem in Pakistan compared to other LICS (Solís Arce et. al. 2021). Until the end of March 2021, only 6.8 percent of Pakistan’s high-risk population had registered for the vaccine and there appears to be hesitancy in the front-line health workers. Yet, the government has still not introduced an effective mass awareness campaign. This needs to be launched immediately ideally with cross-party support to build legitimacy. In addition, the government needs to lower the indirect costs of accessing the vaccine for citizens by expanding the number of vaccine delivery sites.

Another lesson is that the economic shock associated with pandemics like COVID-19 requires the institutionalization of emergency social assistance with much broader coverage that includes the lower-middle and middle classes. The evidence shows that the income shocks associated with the pandemic affect households along all parts of the asset distribution. The incomplete nature of the recovery suggests that a component of emergency social assistance needs to be designed to protect jobs during lockdowns, rather than being disbursed in the form of handouts for employers and citizens that are not tied to jobs. This would require formally registering employment and supplier contracts as part of social assistance programs. These changes, however, require a new social contract between the state, firms, and the working and middle classes in Pakistan. The question for government is whether it is ready to introduce such a program during the third wave?

Ali Cheema, is an associate professor of economics at LUMS and a senior research fellow at IDEAS.

Maha Rehman, a data analytics specialist, is the Director Policy at Mahbub-ul-Haq Research Centre and an adjunct faculty member at LUMS Economics Department