What does the politics of energy tell us about the relationship of the Pakistani state with its citizens? With loadshedding in the news again, it is worth looking at the preceding two decades to assess whether any substantive change in this relationship has taken place.

Between 2007 and 2015, over 450 protest incidents took place in Pakistan in response to the electricity supply crisis, which, at its peak, saw outages last for up to 14 hours per day. The origins of this crisis lay within a variety of issues, including supply chain and debt management, political expediency, and the 2008 economic recession and its resulting oil price shocks. The public outcry as well the state’s response to the energy issue at the time, in turn, is tied to overarching problems relating to public accountability and is an example of mobilization in an elite-biased, low accountability political environment. The public outrage of the time prompted urgency towards the problem. As we know now, the crisis played a significant role in the 2013 General Election, with the PML-N, having prioritized the issue. Its term in government saw severe outages declined, with the average duration of loadshedding reduced to less than three hours by 2018, in large part due to the Chinese investment under CPEC.

However, we now know that larger questions of sustainability and affordability – which have persisted since the late 1990s – remain to this day. In short, the response to the crisis focused on increasing short-term supply instead of addressing the context out of which it had arisen, resulting in subsequent issues.

It can be reasonably argued that inadequacy of solutions offered, and the persisting nature of fiscal and management problems are, at their root, political rather than technical problems. In other words, these are problems associated with trade-offs of who to favour and who to ignore.

The key issue at play is the non-accountable nature of the energy sector, with its highly centralized and insulated decision-making. It is influenced by politicians and bureaucrats, as well as international agencies and state-owned Chinese companies that are investing heavily in energy infrastructure in Pakistan. Bribes, corruption, and networking with DISCOs are commonly used tactics exercised by a variety of largely powerful segments. What is missing from this list of who exercises influence is the average consumer.

What makes the 2007 to 2015 period notable is that it was perhaps the first time that ordinary citizens made their preferences around electricity clear. The context, of course, was extraordinary, with countless hours of outage. Energy protests at the peak of the electricity crisis between 2007-2015 were pervasive, large-scale, and often violent, and helped elevate the issue and bring it to the government’s attention, demanding urgent political action. 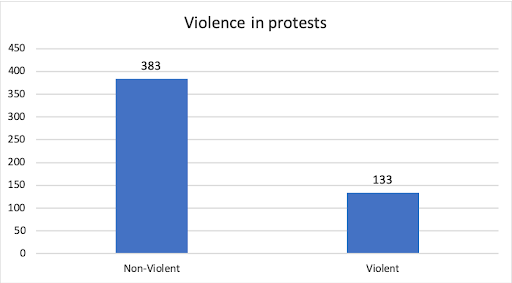 However, the protests and its aftermath also shed light on who ultimately gets heard. In 73% of our documented cases, it was well-to-do traders, politicians, and middle-class urban men organizing them, while the protesters tended to be working-class employees who engaged in high-impact contention such as blocking highways. Interviews with officials revealed that the protests were largely effective by virtue of being backed by essential stakeholders in the energy sector. In addition, while women face problems caused by outages as they are the biggest consumers of electricity on a household level, their voices were often missing in the protests. Affordability remains the most significant concern, with the lower-working classes cutting down expenses on food, childcare, and education to account for exorbitant electricity costs.

The government response to the protests focused on increasing short-term energy supply, and the protests tapered off after 2015 because the immediate needs of the dominant groups among protesters had been met. The state made no significant strides, however, to cut down on losses in transmission and distribution through improving management. With powerful sections satiated by increased supply we find no visible mark or legacy in the form of political transformation that empowered citizens to have a voice in the energy sector.

This pattern of short-term redressal is not unique to the electricity sector, but it is perhaps a domain in which it remains the most persistent and visible. To date, Pakistan does not have any civil society group that advocates for energy rights of ordinary citizens. Parliamentary committees on energy, otherwise designed to provide indirect representation for citizen interest, are met either with friction or indifference. Decision-making remains insular and in the hands of a select few technocrats, donor representatives, bureaucrats, and elite politicians. Furthermore, this insular nature of the sector does not take into account the concerns and voices of human rights activists when it comes to land occupation for energy infrastructure projects, such as might otherwise be observable in the environment and food sectors. In fact, reactions to the voicing of such concerns usually point to the technocratic nature of the sector and the need to free it of ‘politics’, even if the latter is understood within the everyday reality of the end user – the citizen.

These factors contribute to short-sighted analyses of accountability and sustainability of the energy sector. Energy security is not a goal for some abstract geographic entity. It is a goal for the population that resides within that geographic entity. A sector can be managed expertly and with great technical autonomy, while still being accountable and transparent. However as things stand, there is often great concern for the former and almost none for the latter.

If Pakistan is to resolve its energy-related issues in the future, it needs to reframe service delivery as an important political issue of the everyday, rather than one designed to conform to narratives built by an influential elite alone.