In April 2020, following a national lockdown due to Covid-19, numerous jobs across Pakistan became home-based. Although this represented a significant disruption to all sectors and genders, women seemed to become especially affected owing to their dual roles in the home and the workplace. In Pakistan, women spend approximately 10.5 times more time than men on unpaid domestic care work, such as cooking, cleaning, childcare, and looking after older relatives. This means that women spend 15 hours more than men on unpaid domestic work, with an additional 6 hours on childcare. Working women with children under the age of 5 are the most affected due to the excess burden of childcare. The closure of schools, daycare facilities, and a lockdown meant mothers having to look after their children while working their scheduled work hours.

Data was collected via an online survey of 20 variables to investigate perspectives of women from various job sectors, income classes, marital status, and family status about work-from-home employment. To supplement the survey data with qualitative data, interviews were also conducted. A probit regression model was used to understand how working from home (the dependent variable) was mediated by age, income, education, marital status, joint family, self-employment, belief in gender norms, family cooperation, male participation in household tasks, workplace assistance, and increase in household chores due to Covid.

The regression results show that one of the primary determinants of working preferences is education. Women with undergraduate degrees were more likely to opt to work from home compared to those with master’s or PhD degrees. According to the results, women with a bachelor’s degree were 48.4% likely to work from home, as compared to women with a PhD. Similarly, the nature of the occupation also impacted working preferences. Women who were a part of the education sector found it difficult to adapt to the online system and felt that the quality of education dropped due to the online system. However, self-employed women or freelancers preferred working from home, as it allowed them to work at their own pace.

Household structure is also one of the determinants of working preferences. Women living in joint families were less likely to opt for the work-from-home system than women living in nuclear families (a family with parents and children only). According to the study results, only 14.9% of the women living in a joint family system preferred working from home. Living in a nuclear family was explained by women as a chance for both men and women to divide household chores, a model intriguingly associated with ‘Islamic’ norms, whereas a joint family was seen as promoting socio-cultural traditions such as men earning and women bearing the major share of domestic work. The results also demonstrate this: the probability of working from home increased by 12.3% if male family members helped in cleaning. According to one of the respondents, who was a middle school teacher, her father would do the cooking in the absence of her cook, which allowed her to focus on her work; hence, she favored the work-from-home system.

The chances of working from home decreased by the statistically significant probability of 15.6% due to an increase in cleaning duties amongst women. The graph below shows that on a scale of 1 to 5, with 1 indicating no change and 5 indicating a significant change, more than half the respondents reported a drastic increase in cleaning chores during the Covid-19 lockdown. 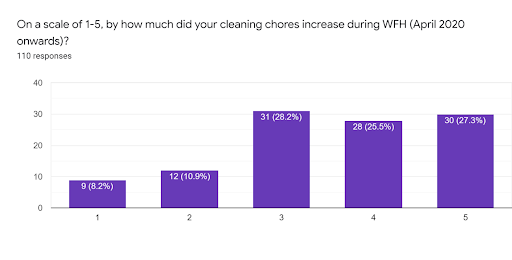 Women worldwide have reported an increase in unpaid childcare duties: 80% of mothers claim that they spend more time than their husbands on online education for their children and in two-parent households, mothers’ uninterrupted paid work hours were one-third of fathers. The respondents in our study shared similar sentiments: only 7.8% of women with children preferred working from home. According to Ayesha, working at home with two children under five meant that she had to sit with her children during online classes, submit their assignments, and focus on her work simultaneously.

Moreover, only 8.3% of respondents believed that their workplace had assisted them in reducing workload. Only 9.1% of the women effectively managed the work-home balance and would prefer to work from home. Many interviewees mentioned that their work, which was once 9-6 pm for corporate jobs and 8-3 pm for the education sector, was now 24/7. Variables measuring male contribution to household tasks such as cleaning, cooking, and childcare overall registered that most men contributed significantly less than women in household responsibilities. This lead to differential working environments for men and women as they work from home.

An implication for organizations is to conduct a robust gender analysis of their employed individuals and redesign their policies, respectively. For instance, they can offer shorter tasks and more flexible deadlines. Overall, the results show that women prefer working from the office rather than working from home. This is due to the unfavorable work environment at home, which makes it difficult for a woman to maintain an adequate work-home balance. Given that an online work structure is here to stay in some form, adapting favorable work-from-home policies that inculcate a flexible work environment is becoming necessary.