Electric Citizenship: Service Delivery and the Creation of a Public Good

The island of Zanzibar, Tanzania was electrified in the mid-1980s. The provision of electricity came with a certain set of expectations – that of individual payments. Anthropologist Tanja Winther notes in her 2012 article how the state electricity company, ZECO, emphasized individual payments for electricity from its consumers and asserted that sharing electricity is a form of theft. Nevertheless, some instances of theft were considered less ‘criminal’ than others – getting a special connection for a wedding or funeral, for example, or allowing a man to share one electricity connection between multiple wives to manage the high cost of installing separate meters. Winther is told by one of her interlocuters that expectations of fairness from the utility company are high: “…if they cheat me, I will also cheat them.”

Providing fair and equitable access to utilities is the cornerstone of building trust between states and citizens. But states are increasingly under pressure to reduce subsidies for utilities such as water and electricity. Last year, several prominent economists argued that electricity shortfalls are a consequence of treating electricity as a right (Burgess et al. 2020). They conclude that if electricity companies in low-income countries could shut off electricity to individual defaulters, as they do in the developed world, collective punishment (and freeloading effects) could be minimized.

Yet consumers in the developing world consume a fraction of what any single individual in the developed world does. The average monthly energy consumption for a single home in the US is 893 kWh. This might include central heating and cooling, an electric stove, and multiple energy-intensive appliances such as televisions. By contrast, higher-income consumers in the developing world consume 574 kWh. Among individual low-income consumers, the average monthly consumption is 98 kWh per month – less than ten percent of a median consumer in the developed world.

Low-income households in Karachi report running ‘a pankha, a charger and a saver’: a fan, a mobile phone charger, and an energy-saver lightbulb. Perhaps the issue is not that energy companies in countries like Pakistan lack the ability to cut off low- and middle-income defaulters. It’s that they lack the incentive to do so. It is far easier to impose collective punishment on, say, two hundred households who only pay for 40% of the electricity they consume than to catch individual culprits who may be stealing. When such behaviour repeats frequently enough, the incentive to pay can experience a significant decline. 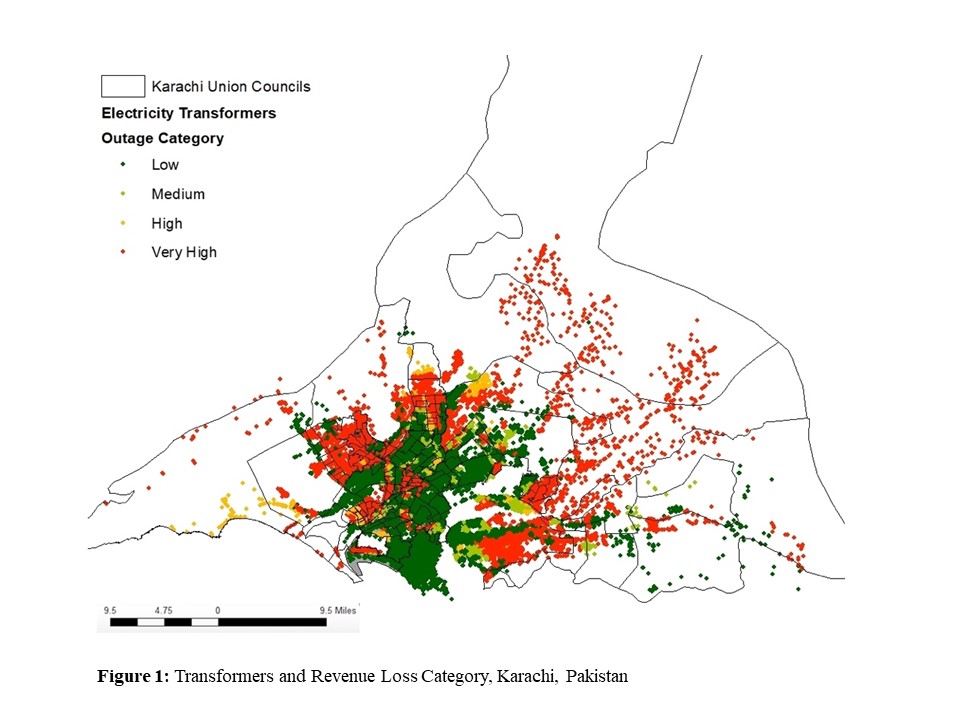 My study on private electricity provision in Karachi reveals several interesting features of household provision and consumption. The privatization of electricity in Karachi has created an important tool for mapping and understanding domestic energy provision in Pakistan: a geo-located map of over 25,000 pole-mounted transformers (PMTs, see Figure 1). Each of these is linked to one of about 1900 feeders. A PMT can connect to as few as 100, or as many as 250 houses, depending on the demand from each.

One recent study pointed out that while calculations of units consumed take place at the PMT level, data on billing is available at the level of the billing center, of which there are thirty. These two points of data allow the utility company to do exactly what previous studies have suggested drives efficient energy provision – prioritize paying consumers and punish non-payers. Each feeder in Karachi, and each PMT connected to it, has a ‘loss’ status – an assessment of how much revenue is ‘lost’. According to the company’s own statements, low-loss PMTs are virtually outage (‘loadshedding’) free. At the other end of the spectrum, very high-loss PMTs can receive an average of 7.5 hours of outage per day.

This article presents results from a survey of 1000 households. Each cluster of households was chosen based on the PMT map of Karachi so that for each household there is a measure of their reported outages, as well as the expected outages based on their location. 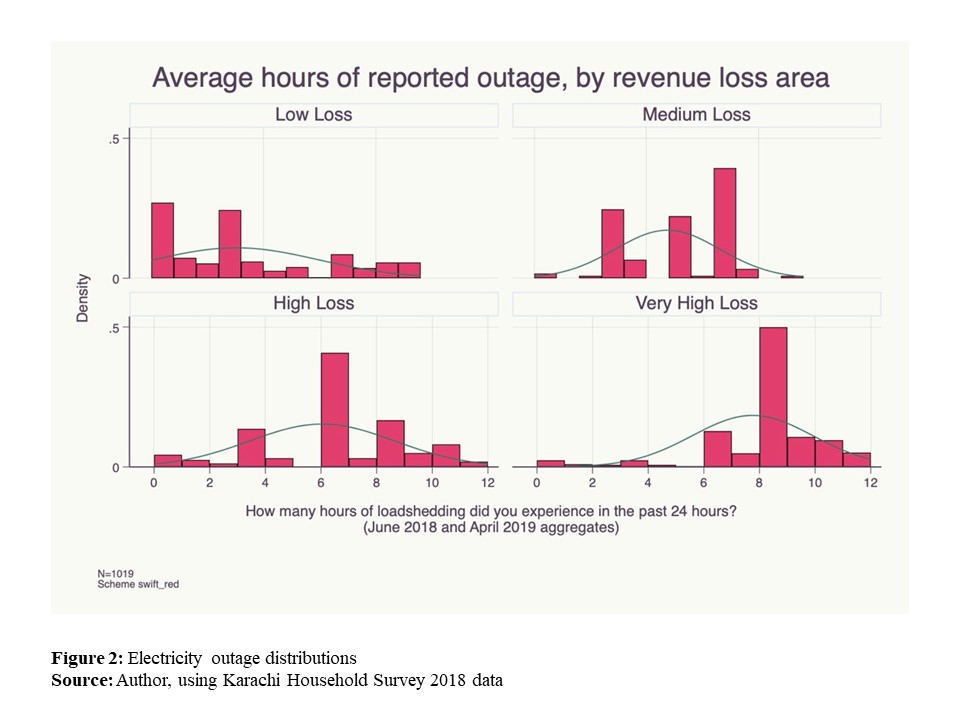 The survey results show that on the one hand, sorting households into recovery clusters has been successful. Figure 2 shows that low-loss areas have two or fewer hours of outage per day. Very-high-loss areas have an average of eight. However, there are large standard deviations. Some households in low- and medium-loss areas regularly experience four or more hours of loadshedding. The simple explanation for this, as suggested by Naqvi et al. (2021), is that proximity to a PMT does not guarantee service from that PMT. Houses are often located between PMTs, leading to ambiguity when measuring their service delivery sector. This can make it difficult for households to manage their utility consumption, or predict the quality of electricity they can expect to receive. 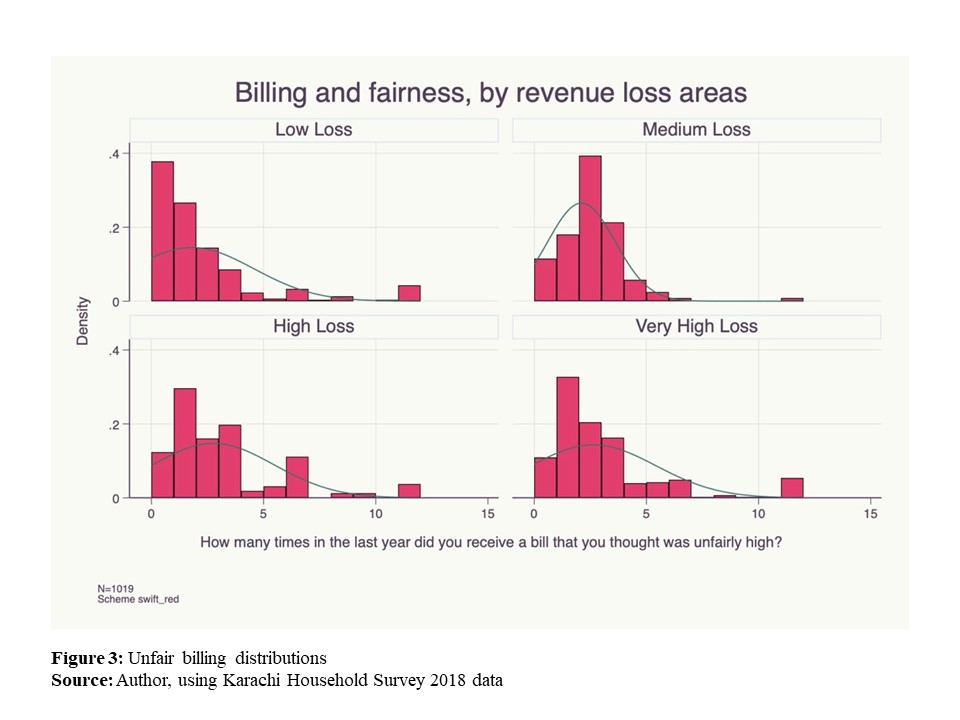 Consumers are expected to make decisions based on the cost of utilities. We would expect higher-income consumers to be better off in a system that privileges people who can pay for electricity over those who can’t. However, this is often not the case. Higher-income consumers also report unfairly high bills (Figure 3). Ultimately, it is their location in the network that determines the intensity of their outages, and not their ability to pay (Figure 4). 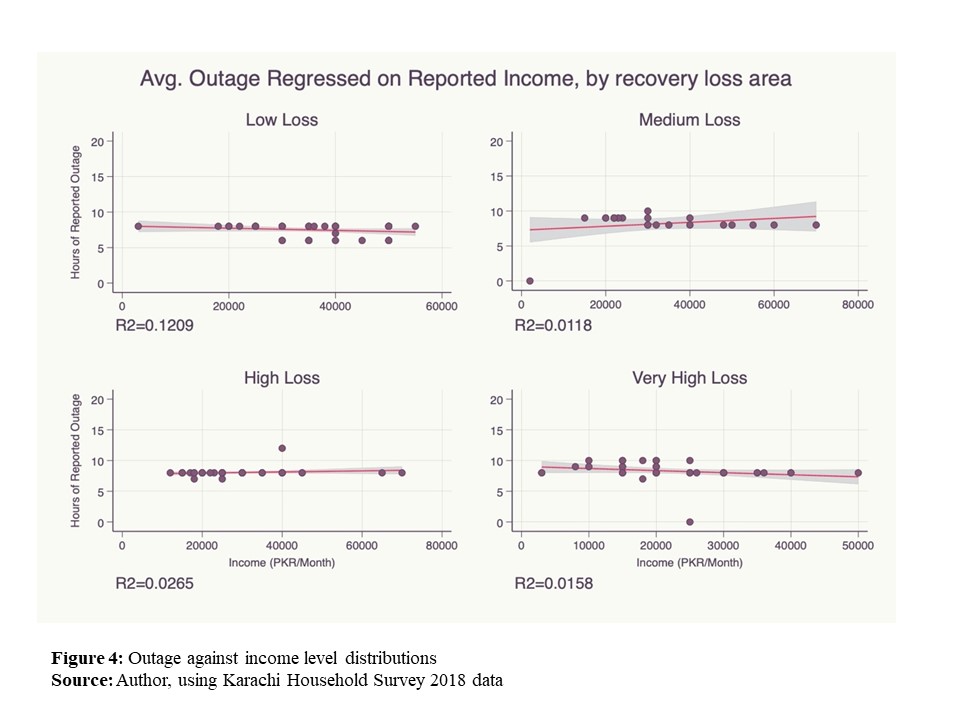 Why don’t individuals who receive very high bills in one month attempt to reduce their utility consumption? One obvious reason might be that low-income households, on an individual basis, are not consuming that much, to begin with. But there might be a different dimension too: the individual ability to impact consumption is higher in low loss neighborhoods than in higher loss neighborhoods, because of the way the utility company views these neighborhoods.

I visited dozens of utility facilitation camps in Karachi between 2017 and 2019. People shared their utility bills and said that they were often confused by the information provided by the bill. When developing the survey, I designed an instrument where individual respondents were asked to show a recent bill. Very often, the units that are consumed do not match the expected rate or tariff, they should be billed at. The most common explanation was arrears or a backlog of payments. Another one was theft.

This is very different from a person living in a low-loss, low-theft neighborhood such as Clifton, Karachi, where individual consumption accurately corresponds to the bill amount. Individuals who live in high-theft neighborhoods, where the utility company spreads the cost of its high revenue losses across the neighborhood, may not find much difference between one month and the next because the main contributor to their bill is not how they, as individuals, behave, but how the neighborhood as a whole performs.

A truly baffling encounter was with multiple customers, who took what they thought were unfairly high bills to the utility company. They were told that a sudden drop in units consumed – presumably, because the individuals were trying to use less electricity – made the utility company suspect that they were stealing! On a visit to Ganchipara in 2018, in the middle of a hot summer day, I noted that the young housewife I was interviewing was fanning herself and her child – the ceiling fan and lights were off. I asked if there was loadshedding in progress. She laughed and said, ‘No, we just try and save units, otherwise our bills are too high for us to afford.’

Some people might be stealing – after all, neighborhoods like hers are a maze of cables, and many of these may be pirated connections. But not everyone is, initially. Eventually, though, it can become increasingly difficult to not ‘cheat’ the company one thinks might be cheating its clients.

Public goods reform is a long and complicated process. We know that privatization is not a silver bullet – the institutions of trust and accountability matter. Karachi’s case demonstrates that while there may be some gains, they might come at the cost of trapping middle-income consumers in neighborhoods that are not well-provisioned. To restore trust in the process, it is important to consider what is ultimately the aim of the state – to provide equitable access to its most vulnerable citizens and to ensure that private actors treat consumers with transparency and fairness.