Electronic Media Regulation in Pakistan: Possibilities for an Unnatural Experiment

Regulation of electronic media has been a central discussion point for Pakistani politics since at least the late 1990s, but in 2002, it took formal shape in the (autonomous) body of the Pakistan Electronic Media Regulatory Authority (PEMRA). Yet arbitrariness of decision-making regarding regulation and censorship is one element that has not changed much despite the transition across various regimes. For instance, shortly after the PTI-led federal government assumed charge in 2018, PEMRA was reminding all channels (by notification) of a 2015 national media ‘code of conduct’, emphasizing a reduction in continuous crime reporting coupled with attention to positive news about the country (PEMRA, 2018). Similarly, what seemed like attempts at countering fake news through an amendment ordinance to the 2016 Prevention of Electronic Crimes Act (PECA) were revealed through judicial review as another draconian attempt at censorship. The current coalition government’s tenure has also already witnessed the registration of cases against various journalists, restricting current affairs coverage by certain channels as well as PEMRA notices/advisories to channels, warning them of severe repercussions if they don’t stop “ridiculing” the army and judiciary.

The regulation of electronic media happens through PEMRA, which is authorized in its watchdog capacity to send notices and directives to channels. But where does PEMRA dedicate most of its time? To look at patterns of notices sent by PEMRA, I studied their notices issued between Jan 2018 and June 2019 (an 18-month period). This period is particularly interesting as it covers two different political regimes: Jan-May 2018 for PML(N) government; and Aug 2018-Jun 2019 for PTI-led government as well as an interim government period of Jun-Aug 2018. The notices were collected from an official PEMRA social media account and its website, as well as through social media posts of official news agency accounts at the receiving end of said notices. These were then converted into a dataset by creating variables around the date of the notice, target channel (or all channels in case the notice was addressed to all channels), and purpose of notice (categories discussed below). 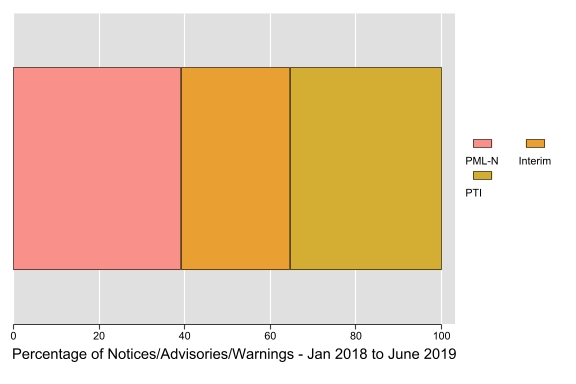 What issues were taken up by the PEMRA notices?

To understand the key issues taken up by PEMRA, I start by breaking down the notices by subject or matter on which the notices are sent (See Figure 2). These categories are constructed based on the content of the notices as specified by PEMRA. As can be seen from the figure, the top category in which PEMRA sent notices to channels in this period is of derogatory remarks against army and judiciary. This comprises about a third of all the notices reviewed for this post. The second most important category is of offensive or hateful content. The third category is of indecent content. Other categories include hurting religious sentiments, airing foreign content, airing violent crimes, and sharing false or defamatory content. 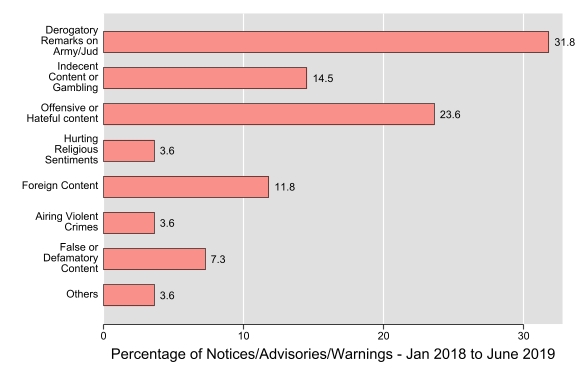 The figure raises important questions about how PEMRA recognizes and classifies a derogatory remark as opposed to, say, a point of journalistic inquiry or discussion. This suggests that restraining discussions on issues that connect back to the army or judiciary are important, but that it may not be limited to PEMRA. In May 2022, for instance, FIRs were lodged against journalists under the claim that derogatory language against the army had featured in their conduct of journalism. Similarly, the category ‘indecent content’ also introduces subjectivity to PEMRA’s decisions – as it’s often only backed by individual public complaints or just PEMRAs own understanding of indecent justified by religious or social norms. For example, a female journalist reported receiving a PEMRA notice for being provocative and indecent for wearing a red sweater.

Very few PEMRAs notices focus on actual false or defamatory content (7.3%). Some of these may focus on news items, which may not have been verified at the source. For example, in 2018, a PEMRA notice was issued to channels running on-screen tickers with a report of then Prime Minister Imran Khan expressing displeasure over the performance of Asad Umar (his then Finance Minister) in an informal party meeting. In contrast, and despite my thorough review, I have not found PEMRA issuing notices for basic fact-checking or misreporting of verifiable economic indicators/statistics, which can indeed have profound effects on decision-making.

In addition to looking at the content of notices, I also break them down by the 3 distinct regimes that fall within my dataset.  Figure 3 presents this data graphically. 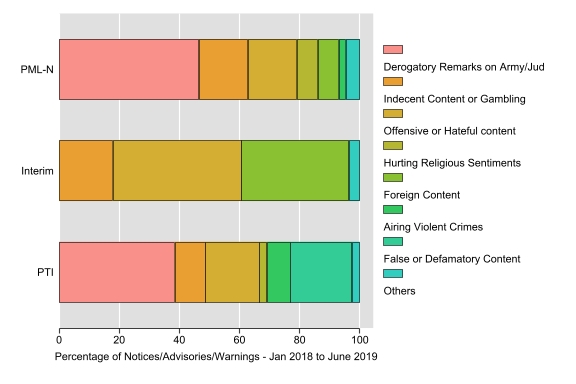 As can be seen from Figure 3, despite changes to elected political leadership, the largest category of notification remains the same: derogatory remarks against the army and judiciary. In terms of percentage, it is slightly lower during the PTI-led regime. Interestingly, there are no notices of this category sent by PEMRA during the interim government in the summer of 2018, although it is unlikely that conversation related to these institutions stopped during this period. While it is not possible to say exactly why this might have been the case – and could form the basis of a more detailed research investigation – one way to evaluate this peculiar finding could be related to the seemingly apolitical/technocratic nature of a short-term interim government, which is tasked with the primary responsibility of running the country as it prepares for General Elections. Regardless, that not even a single notice on the most prominent category was sent during this interim period remains both intriguing and worth probing further.

Another interesting finding is the increase in notices on false or defamatory content during the PTI-led government as countering fake news was an important part of their agenda on media regulation. However, and as I described earlier, notices on false content are mostly related to material that is difficult to verify rather than actual verifiable news, only adding more confusion to what can/should be publicly aired.

Are there differences between channel-specific and all-channel notices? 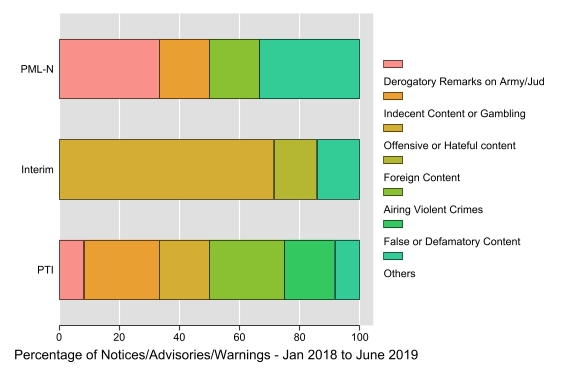 Figure 4A: PEMRA Notices by Regime and Purpose for All Channel Notices 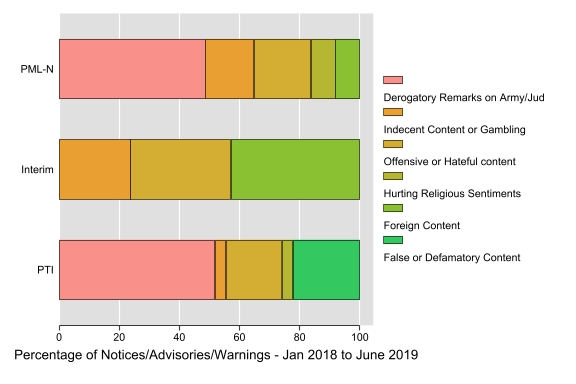 Figure 4B: PEMRA Notices by Regime and Purpose for Channel Specific Notices

What have we learned and how do we go from here?

The evidence presented through this post raises interesting questions about the arbitrary nature of media regulation conducted by a seemingly autonomous media watchdog under different political governments. There is a need to build a data-driven quantitative research agenda around these issues and also consider the role of causality in establishing important relationships, such as why no anti-establishment conversation is taken note of during apolitical governments (such as an interim one between elections).

Other questions could investigate the impact of PEMRA notices on newsroom conduct or view perceptions about national narratives. From both journalism and economist perspectives, this debate could also shed more light on relationships between government advertising allocations and news content/PEMRA notice of such content. Such probes would require, however, efforts both from relevant government departments (including information departments) as well as from private channels/media houses to open doors to researchers and improve data-sharing mechanisms toward better quality journalism in Pakistan.

[1] For this analysis, show cause notices, advice or warning, directives, and prohibition orders are clubbed together into “notices”.  Out of these, around 60% were show-cause notices (taken after a channel has already aired content that is not acceptable to PEMRA and then channels are given time to respond to PEMRA in terms of why action should not be taken against them); 31% were advice or warning (these are less channel-specific, and usually tell channels to avoid certain topics of discussion otherwise action may be taken against them); 7.27% were directives (similar to advice), while the remaining 4.5 % were prohibition orders (generally used to prohibit channels from airing certain content).