Sensitivity of Crop Yield and Productivity to Climate in Punjab

Pakistan is one of the most vulnerable countries to the effects of climate change on its agriculture sector. Climate-related weather changes will continue to impact Pakistan’s agriculture in the years to come – a point made abundantly clear by IPCC (2014) and ADB (2017). Earlier review papers (ADB (2017); WFP-SDPI, 2018) and empirical studies (Ali et al., 2017; Abbas and Mayo, 2021) have demonstrated that Pakistan’s yields of major crops are sensitive to irregular and shifting precipitation patterns and rising temperatures due to climate change. However, these studies have not adequately quantified the key sensitivities between variations in temperature and rainfall and total factor productivity using various crop development phases, i.e., crop. (No idea what we are talking about? Here’s an easy explanation of TFP).

In a companion blog post, we show that crop agriculture TFP in Pakistan declined between 1993 and 2019. In a background paper to the World Bank’s 2022 country memorandum for Pakistan, we investigate the impact of spatial variations in extreme weather patterns on crop yield and TFP in the Punjab province of Pakistan. We assess the sensitivity of temperature and precipitation on farm TFP and yield by employing unbalanced panel data of wheat (N = 39,288, T = 7), basmati rice (N = 21,675, T = 6), sugarcane (N = 21,085, T = 8) and cotton (N = 18621, T = 7) farms from Pakistan’s Punjab province for the period 2013 – 2020 [1]. We estimate TFP by using a two-step semi-parametric estimation on the pattern of Levinsohn and Petrin (2003) and Ackerberg et al. (2015) and apply regression models that consider the unique plant phenology of each crop by which they grow and mature to reveal how district-level variations in temperature and precipitation affect farm level TFP and yield in Punjab.

Figure 1 presents changes in estimated levels of each crop’s TFP distributions between the first and last year of the sample period by using the TFP-density function. Density functions reveal that for this dataset, last year’s TFP distributions for wheat, rice, and cotton farms experienced a notable shift to the left of the first-year TFP distributions, indicating that the overall mean TFP of these crops has declined over the study period. The density functions of sugarcane farms show that a large part of the 2019 unweighted TFP distribution shifts to the right, which means that in this part of the distribution, the TFP of 2019 was larger than that of 2013. However, the growth rate in the weighted TFP level of these crops presents a more accurate picture. The estimation results reveal that, on average, farm-level TFP of wheat, rice, sugarcane, and cotton farms has declined over the period of 2013 – 2020 at an average annual rate of 4%, 2%, 3.2%, and 4.6%, respectively. 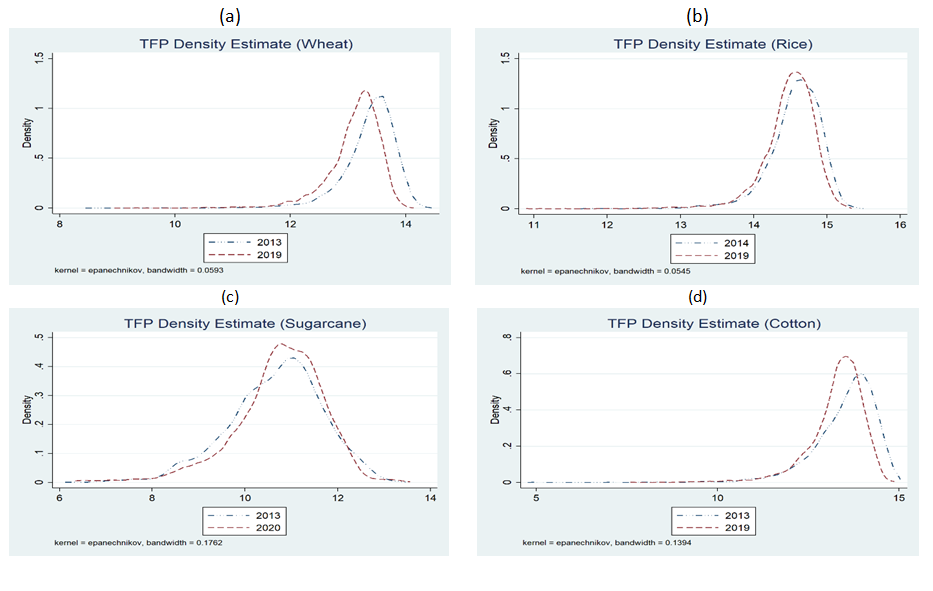 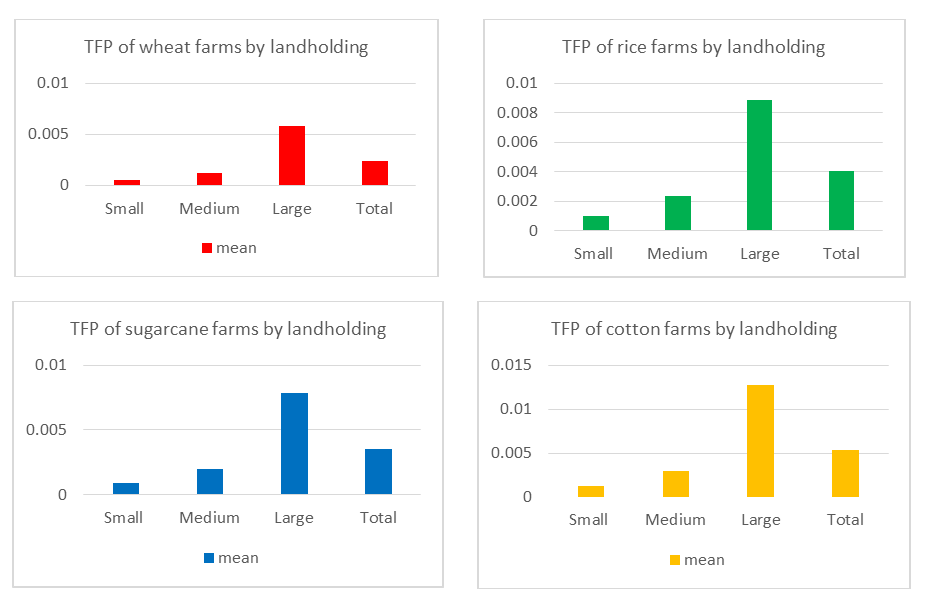 Sensitivity of farm yield and TFP to extreme weather

Estimation results suggest that the wheat crop is adversely affected by elevated temperatures during the early and maturity phases. Elevated temperatures during crop growth cycles have significant negative effects on both the yield and productivity of wheat farms. For example, one standard deviation increase in extreme temperature during the first 60 days of the crop growth cycle lowered TFP by 0.62% and yield by 0.8%. Moreover, every 1 mm increase in rainfall during the shooting phase when stem extension occurs (i.e., 22nd January to 16th February) raises TFP, on average, in the range of 1.3% to 1.6%, and yield in the range of 1.2% to 1.4%. The sensitivity of wheat plant to temperature is relatively highest in the milk and wax maturity phase (the last 27 days of the crop cycle) because this is when grain formation takes place.  During this phase wheat crop consumes, on average, 18 heat units per day. A rise in heat units was most harmful because the elevated temperature in this phase damages yield by reducing the number of days of the grain has for filling, leading to reduced kernel mass. Late harvesting of Kharif crops often results in late planting of wheat which, in turn, becomes particularly vulnerable to the heat. Damage to wheat productivity also occurs during the sowing to tillering phase when days with temperatures above the optimal temperature, or killing degree days (KDD), slow down the process of emergence, third leaf and tillering, perhaps by making sprouts more to damage.

For basmati rice, evidence suggests that yield and productivity across farms are most sensitive to variations in precipitation levels during crop growth. Higher rainfall in vegetative and reproductive (heading and flowering) phases of the crop cycle negatively impacted the TFP of rice farms. Muddy water causes severe damage to rice plants and heavy rainfall reduces the number of rice plants, adversely impacting yield and productivity. Moreover, while the average sensitivity of rice crop to temperature was generally low during the vegetative and ripening phase, we found that the sensitivity of TFP to high temperatures was highest during the reproductive phase. Our results indicate that elevated temperatures increased the stress on rice plants significantly in this phase, leading to reduced TFP.

Our estimates also reveal that sugarcane yield and productivity are highly sensitive to higher temperatures during the maturity and germination phases of crop development. Increase in growing degree days (GDD) in the maturity phase inhibits growth in yield and TFP because cooler temperatures are more favorable in the three months prior to harvesting. Similarly, higher levels of KDD in germinating phase significantly reduce yield and TFP, possibly because when temperatures exceed the optimal level for sprouting of stem cuttings, it can slow down the process to the extent of practically stopping it.

Pakistan has faced increased variability of temperature, and erratic monsoon rains that have often produced intense floods and droughts (ADB (2017). Extreme weather events in the future are expected to occur with greater frequency and severity both in temperate and tropical regions IPCC (2014). With more extreme weather expected in this region, all four major crops are extremely vulnerable.

Adapting to the Impact of climate change

Policymakers may want to adopt practical steps to persuade farmers to adapt to the change in the climate. These can include recommendations to complete early sowing of wheat until mid-November to avoid heat stress at grain formation stages and to update wheat sowing dates in light of the late arrival of the winter season.  Additional steps to adapt to the impact of changing climate include developing more heat and drought-resistant seeds for the vulnerable districts.

Similarly, new rice cultivars that are resistant to high temperatures, and are suitable to grow in vulnerable districts, would reduce the vulnerability of the basmati rice crop to climate change. The introduction of early harvesting shorter duration basmati rice varieties is another option, which will also have positive spillover effects on the early plantation of wheat crops.

To mitigate the negative effects of climate change on sugarcane crops, biotechnology may be introduced to improve plant traits including water use efficiency, heat tolerance, and frost resistance (Srivastava and Rai, 2012). To maximize gains, these technologies can be secured from developed countries, made economically accessible, and disseminated widely. Finally, new private sector research into genetically modified technology can help in providing high-temperature tolerance and other major crops, though the issues pertaining to intellectual property rights and fair returns to private investors can hinder its best use. Therefore, public intervention may be required to adopt corrective measures where there are instances of market failures.

[1] The farm-level data was obtained from the Crop Reporting Service (CRS) of the Punjab Agriculture Department, which annually collects the data from randomly sampled farms based on a survey questionnaire administered to the farms to collect accurate acreage and production estimates for Kharif and Rabi crops each year. We merge the farm-level data with meteorological data in the phenological stages of the crops. District-level weather data was collected from “Reliable Prognosis” which is an online data source.

This post is based on Burki, Abid A., Verda Arif, Abubakar Memon (2022). Sensitivity of Crop Yield and TFP to Extreme Weather Events in Pakistan’s Punjab, Background paper for Chapter 4 of “From Swimming in Sand to High and Sustainable Growth: A Roadmap to Reduce Distortions in the Allocation of Resources and Talent in the Pakistani Economy.” Pakistan’s Country Economic Memorandum, World Bank, Washington, DC. http://hdl.handle.net/10986/38133

Abid A. Burki is an Adjunct Professor (Economics) at LUMS and a Fellow at MHRC, LUMS.