Taking Pakistan Out of Economic Crisis: Are We Doing Enough? | The Friday Economist

Post the 1960s, Pakistan’s economic history has not been especially renowned for innovation or excellence. But in 2022, the economy’s characteristic underperformance was only exacerbated by catastrophic floods leading to widespread destruction of infrastructure, loss of life, and the highest food prices in over 40 years that have left the country’s poor unable to access many staples. The Government of Pakistan struggles to meet a worsening situation with an effective plan for economic stability or recovery. Unparalleled rallies across Pakistan by citizens protesting corruption and unoptimistic job prospects indicates rising frustration among a growing middle class with governance failures in the country.

In a previous blog post, we identified two major improvement areas the Pakistani economy requires to emerge from its present economic problems – improved tax collection and establishment of a high-value export sector. Here, we dig deeper into Pakistan’s economic problems, and analyze whether current remedies are sufficient for bringing the economy out of turmoil.

Inflation, measured by Consumer Price Index (CPI), spiked in August 2022: up by 27.3% year-on-year (YOY). This is the highest recorded figure in Pakistan’s history since 1973-1974 (Pakistan Bureau of Statistics). But this is part of a larger pattern, captured in Figure 1. Year-on-year inflation has been in double digits, and over 20%, from June 2022. As per the latest published statistics from the Pakistan Bureau of Statistics, in December 2022, YOY inflation was 24.5%. 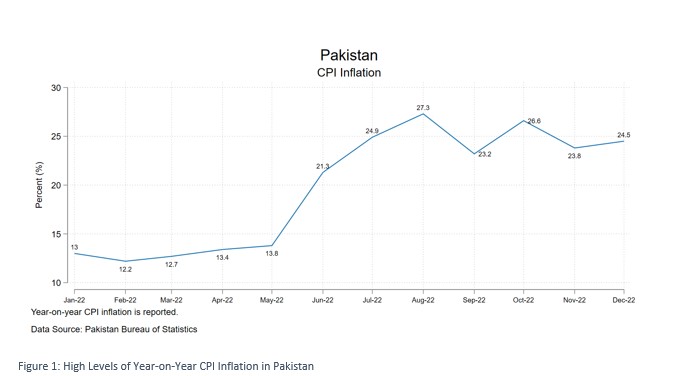 Since 2004, Pakistan’s reserve levels have not been great. Its best reserve levels have only been enough for about 5 months of imports. But as Figure 2 suggests, Pakistan is currently unable to touch even this high (realistically, only in a position to afford about 3.5 months of imports). Pakistan had total liquid foreign exchange reserves of $10 billion in the week ending 6th January 2023 (State Bank of Pakistan). For perspective, in December 2022, our import needs were valued at USD 7.5 bn. 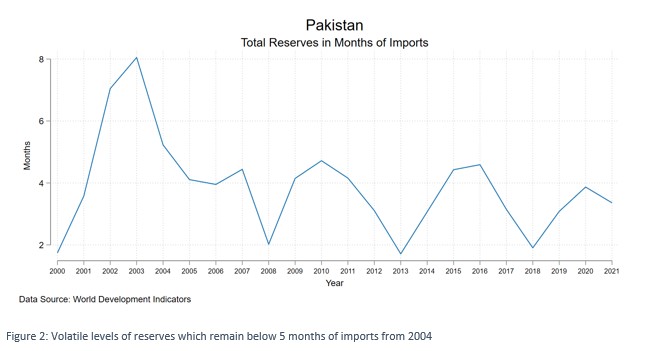 Current account (CA) was in a deficit of USD 12 bn in the year 2022 (State Bank of Pakistan). (Not sure what this current account matter everyone keeps talking about is? Click here for easy ideas.) Pakistan’s current account has consistently been in deficit since 2004, with accelerated increases in the years 2003-2008 and 2015-2018, offset respectively by recovery efforts in the years 2010 and 2020 (Figure 3). When read with Figure 2 above, this trend makes an important case for why exports (especially of high value) are critical to economic trade and sustainability for Pakistan. 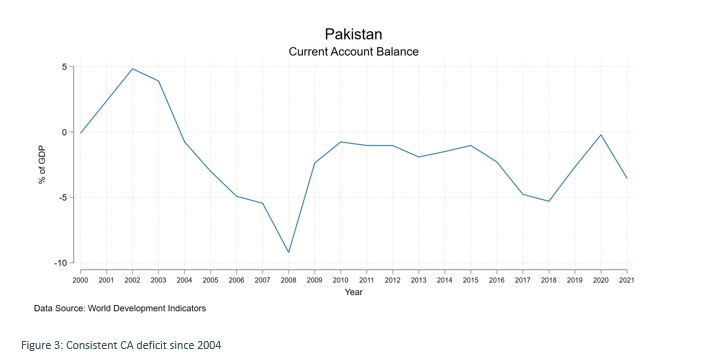 Fiscal deficit (the gap between what the state generates through revenue sources, and what it spends on itself and its people) has been rising (Figure 4). 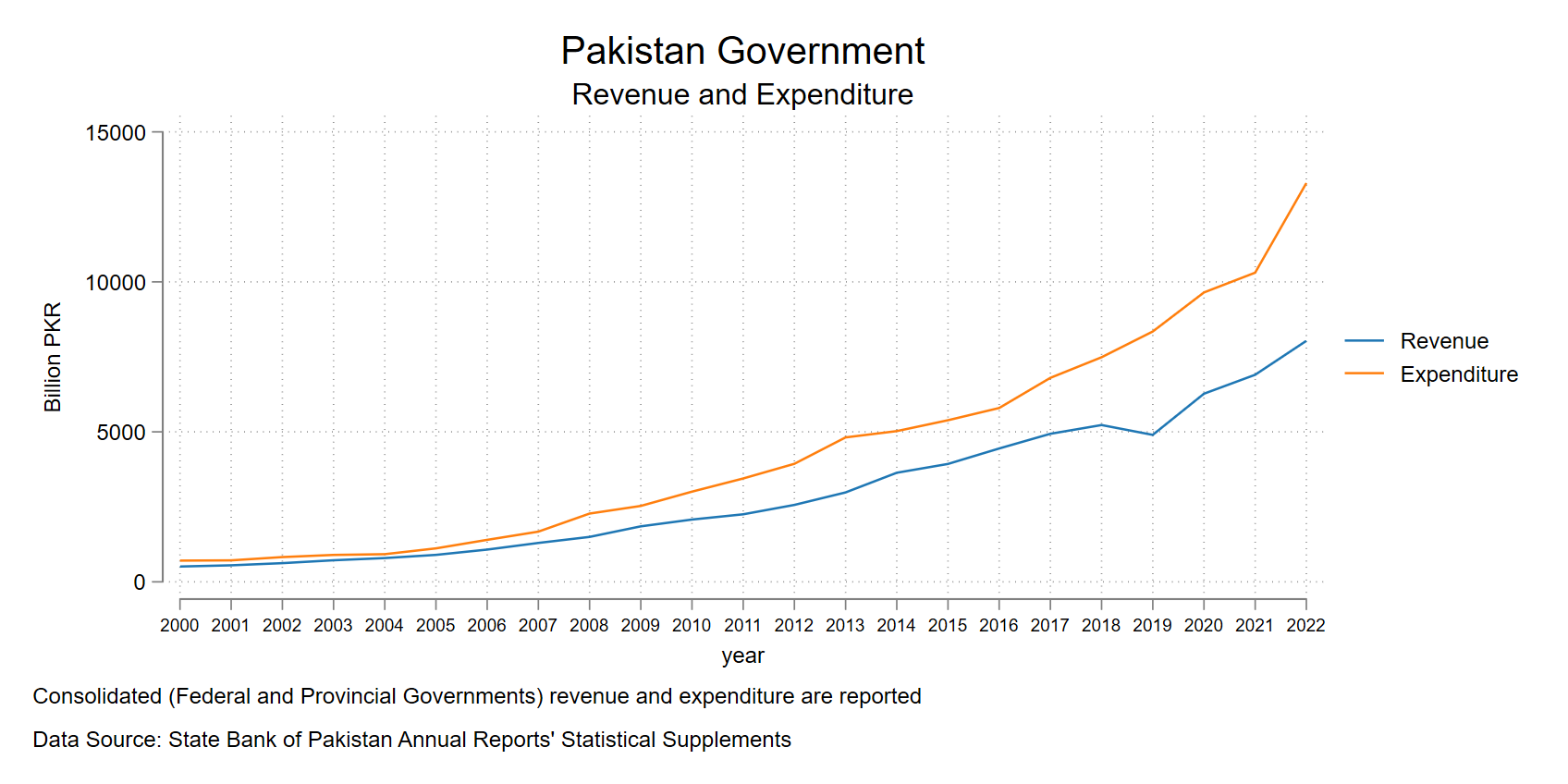 Central government debt as a percentage of GDP (Figure 5) helps indicate economic health by evaluating what proportion of a country’s overall capital is dedicated to loan repayments. This also shows an increasing trend since 2007, and in 2020, stood at 87.6% of GDP (IMF). As Pakistan is a developing country and needs to spend large amounts on developing infrastructure and industrial growth, and this debt burden inhibits its ability to make such investments, it cannot sustain such high (and growing) debt levels. 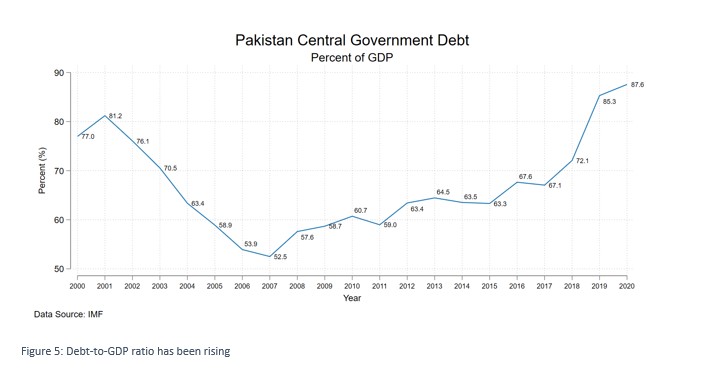 Pakistan’s current economic crisis did not happen overnight. In fact, careless and unintelligent policies and state actions over decades have brought the country to the brink of default.

The country’s persistent twin deficits (Figures 3 and 4) have driven it to a juncture where it cannot even pay for vital imports like fuel, medicines, and food without relying on IMF bailout packages, or loans and other forms of support from friendly countries.

So, what went wrong? Is our economic condition a result of poor decisions made by policymakers? Or is it a result of external shocks like the pandemic and Russia-Ukraine war?

One key factor responsible is the country’s fiscal deficit. Majorly contributing to this interminable widening deficit are tax collection problems in Pakistan. While Pakistan needs to widen its tax base to improve collection, it also needs to make the tax burden more equitable across sectors. Presently, Pakistan overburdens its manufacturing sector with taxes, while services are taxed at low levels (for their value and share in the economy). In 2017-18, for instance, the manufacturing industry generated about 21% of Pakistan’s GDP, but paid some 70% of our taxes (more than 3 times its percentage points of earnings). Services had a 60% share in GDP, but contributed to only 30% of the country’s tax pool – half of its share of earnings.

The agriculture sector enjoys virtually zero taxes. While agriculture had a 19.2% GDP share, its contribution to the tax net was documented as only 0.6% (State Bank of Pakistan)! This skewed tax burden on the manufacturing sector has discouraged the growth of the manufacturing industry required urgently by Pakistan. Not only has this policy of uneven taxation across sectors prevented higher tax collection from certain sectors within the economy, but it has also discouraged industrial growth in two ways: a. new industries from setting up and b. expansion of existing industrial sectors. Pakistan needs tax reforms to meet its expenditure needs, and a more robust incentives regime for new and more productive business to set up.

To reduce the fiscal deficit, Pakistan also needs to improve its government spending efficiency and reduce wasteful expenditures. Our problem is not overspending; rather poor spending results in misspending (a misallocation of constrained resources to unproductive or less productive parts of the economy).

The other major factor exacerbating our macroeconomic problems is the lack of a developed export sector. Historically, Pakistan has employed import substitution policies which have hampered the development of a high-value exports sector. Import substitution industries have enjoyed protections, such as an overvalued rupee, which has discouraged exporters by making Pakistani exports less competitive in the world. Also, with the government focus being on import substitution, growth incentives for the export sector have not been created. As a result, Pakistan has never been successful in developing an export sector which trades high-value goods internationally. The absence and importance of this sector can be felt very strongly in Pakistan’s current economic crisis, where we keep struggling to build our foreign exchange reserves. If we had an established exports sector, we would not need to rely upon foreign aid, loans, and the IMF for our foreign exchange needs.

If the problems facing Pakistan are so obvious, why do we keep encountering them? Pakistan inherited colonial governance institutions at its independence, which, with their exploitative methods of governance, exist to date. Such institutions manifest a lack of political appetite for reform. Their beneficiaries largely lack incentive to invest in operational/regulatory changes that can engender more participatory growth and welfare. As there are factions within the country who benefit from this status quo, the strong push required for change is absent. For example, import substitution industries which have enjoyed protection for decades profit exactly from policies, which hurt the export sector. Similarly, entities which enjoy preferential tax treatment from governments benefit from this arrangement and would oppose any efforts towards the introduction of competitive reforms in the economy. In the absence of corrective political action to address these structural shortcomings of the economy, its problems will persist.

While it must be noted that the COVID pandemic, Russia-Ukraine war, and floods within Pakistan largely contributed to worsening economic conditions worldwide including Pakistan, their effects would not have been so severely felt within the country if we did not have pre-existing structural problems. Stopgap measures like loans and donations or reducing opening hours for commercial activity are no longer sufficient. It is high time for state actors to recognize Pakistan needs a structural overhaul grounded in principles of competition, fairness of the law (especially contractual enforcement), and protection of small/emerging producers.

The writers acknowledge Dr Ali Hasanain, Associate Professor of Economics at LUMS, for his views on the status of Pakistan’s macroeconomy.

Verda Arif is a Teaching Fellow at Department of Economics, LUMS

Rabia Khan is a Teaching Fellow at Department of Economics, LUMS