The Pakistani Economy – Another South Asian Default in The Making? | Friday Economist

The Pakistani economy, like Sri Lanka, has a habit of periodically knocking on the IMF’s doors for financial bailout packages. The economy often runs into macroeconomic difficulties, to resolve which it must resort to acquiring IMF assistance. Sri Lanka, while facing unsustainable debt and serious balance of payments problems, defaulted on its external debt in April 2022. Considering recent events within the Pakistani and Sri Lankan economies, this blog piece assesses the following question: should Pakistan consider the Sri Lankan default a warning sign for its own economy?

To explore this question, we analyze the Pakistani and Sri Lankan economies based on key macroeconomic indicators and their trends and discuss parallels between them.

During recent years, Pakistan has found itself stuck in a cycle of rising debt without a long-term repayment plan. Figure 1a below shows the rising trend in Pakistan’s debt-to-GDP ratio which stood at 87.6% in 2020. 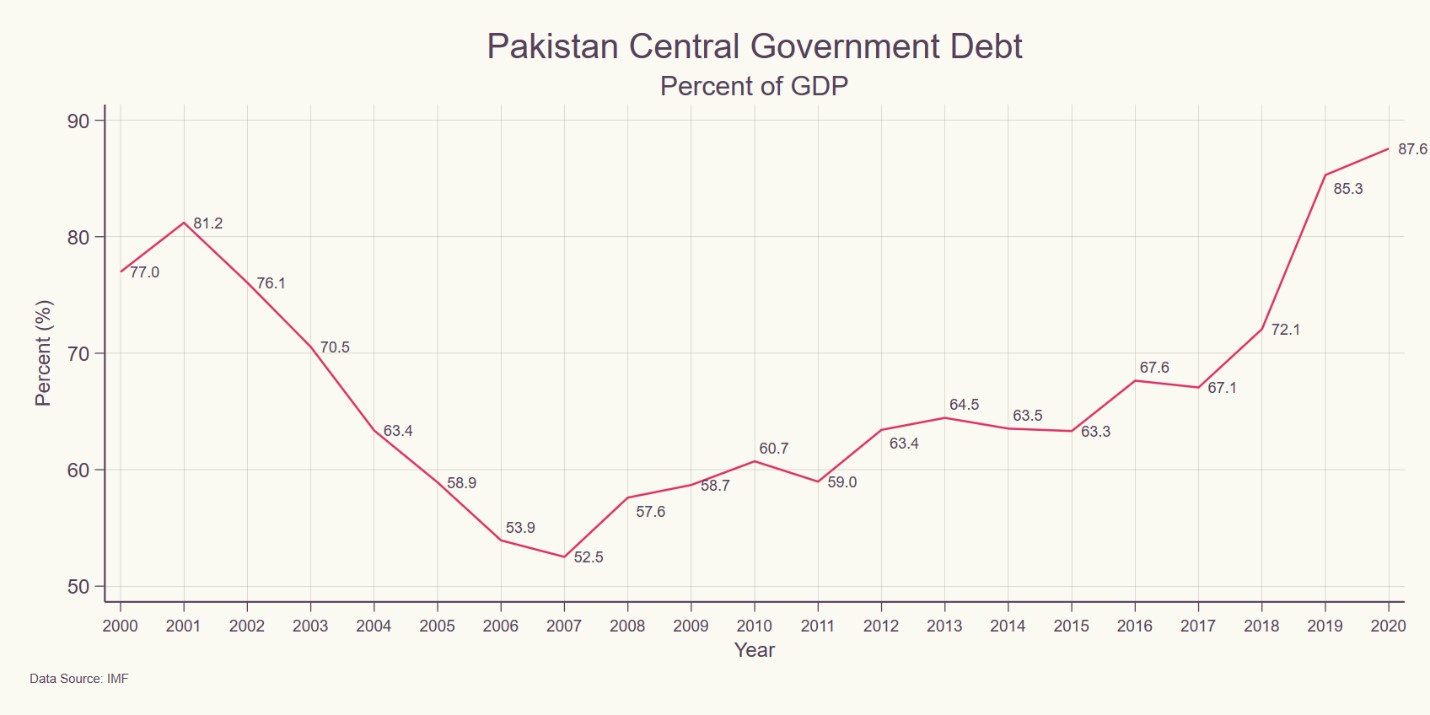 A clear pattern emerges from Figure 1a: from 2007 onwards, there is a general rise in Pakistan’s debt as a percentage of GDP with this number showing a considerable jump in 2019 – likely triggered, in large part, by public financing requirements to combat COVID-19. Regardless, the absence of a long-term repayment plan along with a clear trend of rising debt-to-GDP ratio is an alarming situation for the country.

We know that Sri Lanka announced its default on external debt in April 2022. Preceding this announcement, Sri Lanka also faced a similar problem – debt rising significantly. Figure 1b below shows the trend in Sri Lankan central government debt-to-GDP ratio. In 2020, it stood at a record high (in the country’s history) of 101.2% of the country’s GDP! 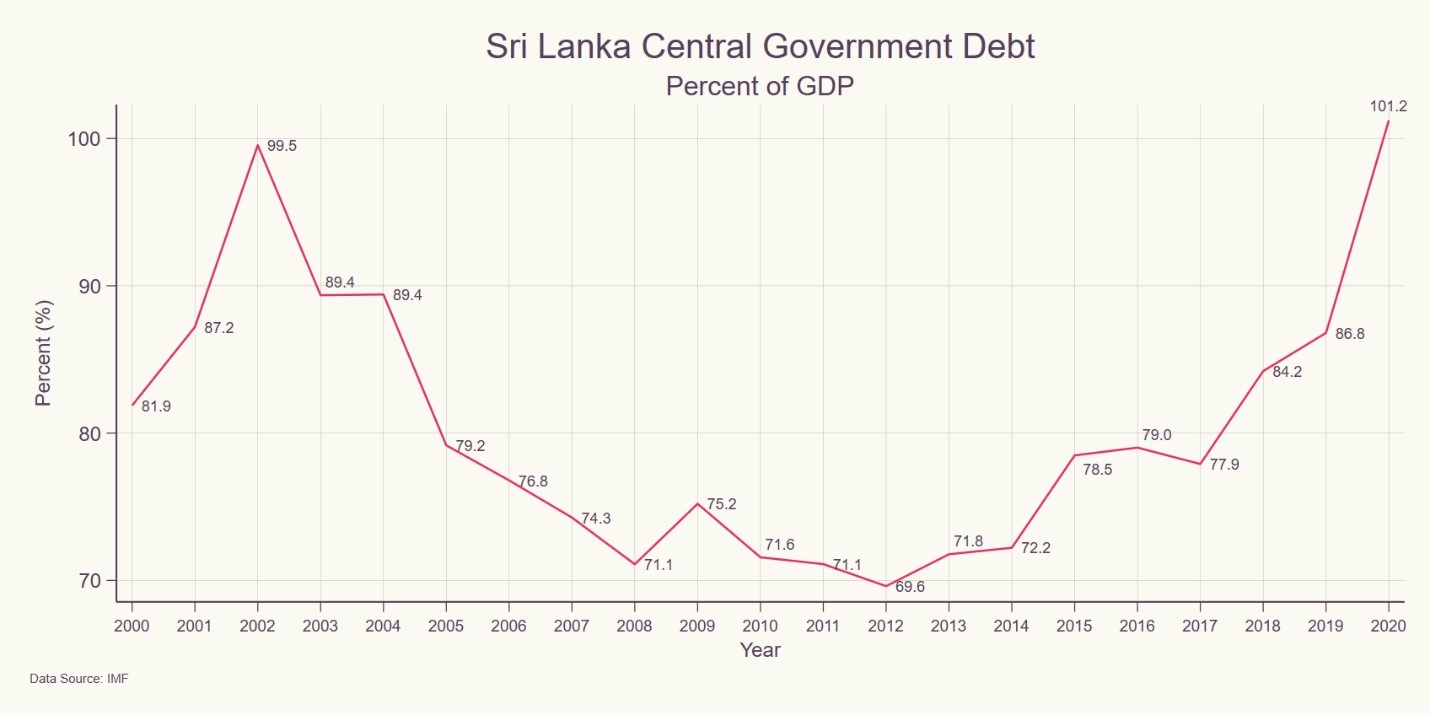 While Pakistan’s debt-to-GDP ratio is not increasing as sharply and has not yet reached similar levels as Sri Lanka, it appears to be travelling on a similar trajectory. Widening fiscal deficit and balance of payments problems, which ultimately led to default in Sri Lanka, are also problems that Pakistan faces consistently.

But what happened in Sri Lanka? Over years of accumulating significantly large amounts of internal and external debt, with the pandemic adversely affecting tourism – a major foreign exchange source for its economy – and the Ukraine conflict resulting in a global rise in commodity and fuel prices, the country faced increasing difficulty in paying for vital imports like food, fuel and medicine. Faced with dwindling foreign exchange reserves, and a budding balance of payments crisis, Sri Lanka halted its debt repayments in an attempt to address essential import payments. This, coupled with a lack of willingness to begin timely negotiations to restructure its debt, the country found itself in an inevitable state of default on external debt.

Balance of payments crisis due to rising current account deficit

Like Sri Lanka, adverse effects of the Russia-Ukraine war have affected Pakistan. Even in the past, Pakistan has struggled with its current account (CA) deficit, cyclically running into periods of worsening CA (Figure 2). More recently, however, due to the war, the country’s import bill has surged due to rising fuel prices – as petroleum products constitute a sizable proportion of its imports. In the absence of high-value exports, Pakistan’s CA deficit in the first half of fiscal year 2022 has has only worsened to USD 9 billion from a surplus of USD 1.2 in the (Pakistan Development Update, 2022).

For comparison, as Figure 2 illustrates, Sri Lanka also faces cyclical and significant CA problems. In 2020, while Pakistan’s CA balance as a percentage of GDP was -0.2% which worsened to -3.5% in 2021 (The World Bank), Sri Lankan CA balance was -1.3% of its GDP (The World Bank). These numbers and the overall CA balance trends of the two countries presented in Figure 2 show that both Pakistan and Sri Lanka face periods of worsening CA followed by temporary improvements, which do not last due to structural problems within each economy. 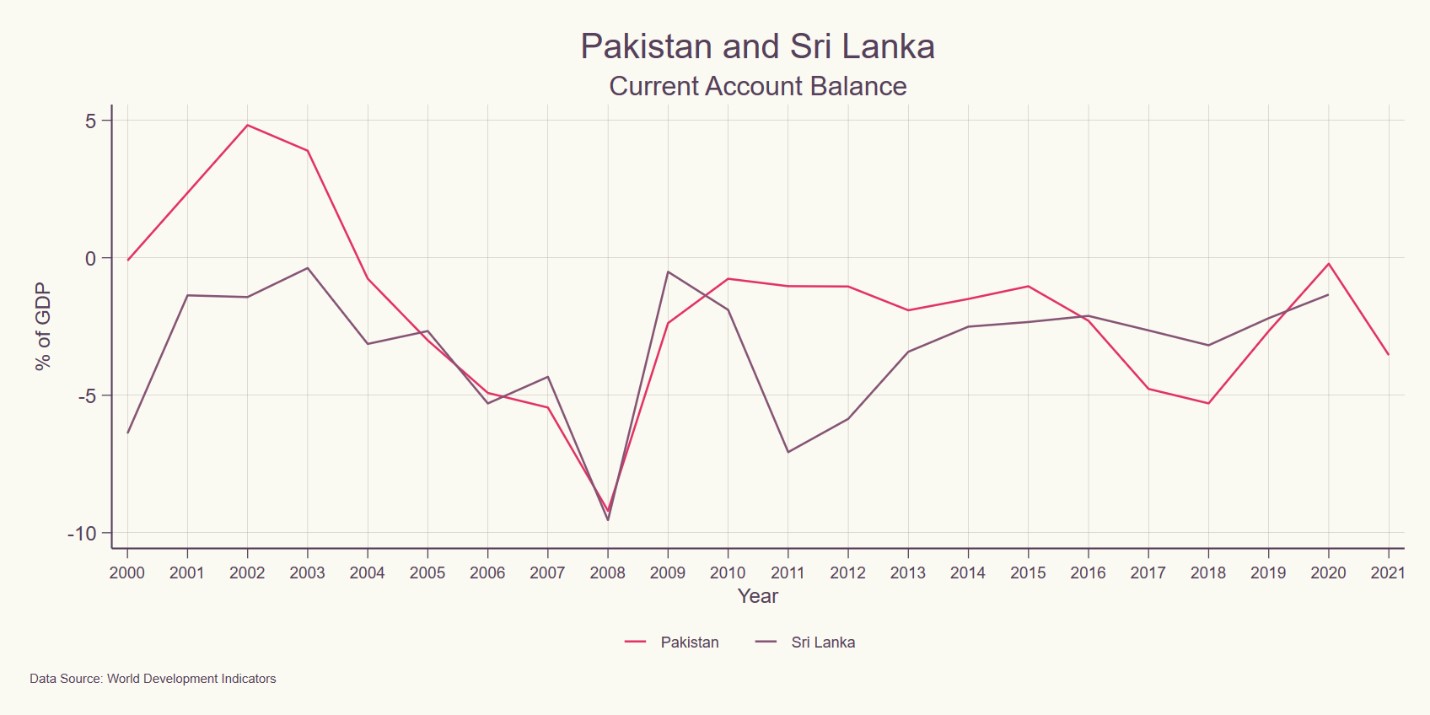 Faced with its most recent round of a deteriorating CA, Pakistan has had to raise fuel prices and impose power cuts to help offset a rising fuel import bill as well as fuel shortages. This is another parallel with Sri Lanka, where worsening CA led to such severe fuel shortages that power blackouts became the norm.

This increase in Pakistan’s import bill had another knock-on effect: it depleted the country’s foreign exchange reserves, and by July 2022, Pakistan had about USD 14 billion worth of liquid foreign exchange reserves left (Foreign Exchange Reserves, State Bank of Pakistan). For reference, in August 2022 alone, Pakistan’s imports amounted to USD 6.9 billion (Export and Import of Goods and Services, State Bank of Pakistan). Assuming about a similar level of monthly imports, these reserves were only enough for two months of imports at the ! At this point, it seemed as if Pakistan was on a similar trajectory as that of Sri Lanka.

In April 2022 (the month in which it defaulted), Sri Lanka had total reserves of USD 5.3 billion which were sufficient only for one month of imports (Monthly Economic Indicators, Central Bank of Sri Lanka). Hence, this is yet another unfortunate likeness between Pakistan and Sri Lanka’s recent economic situations. 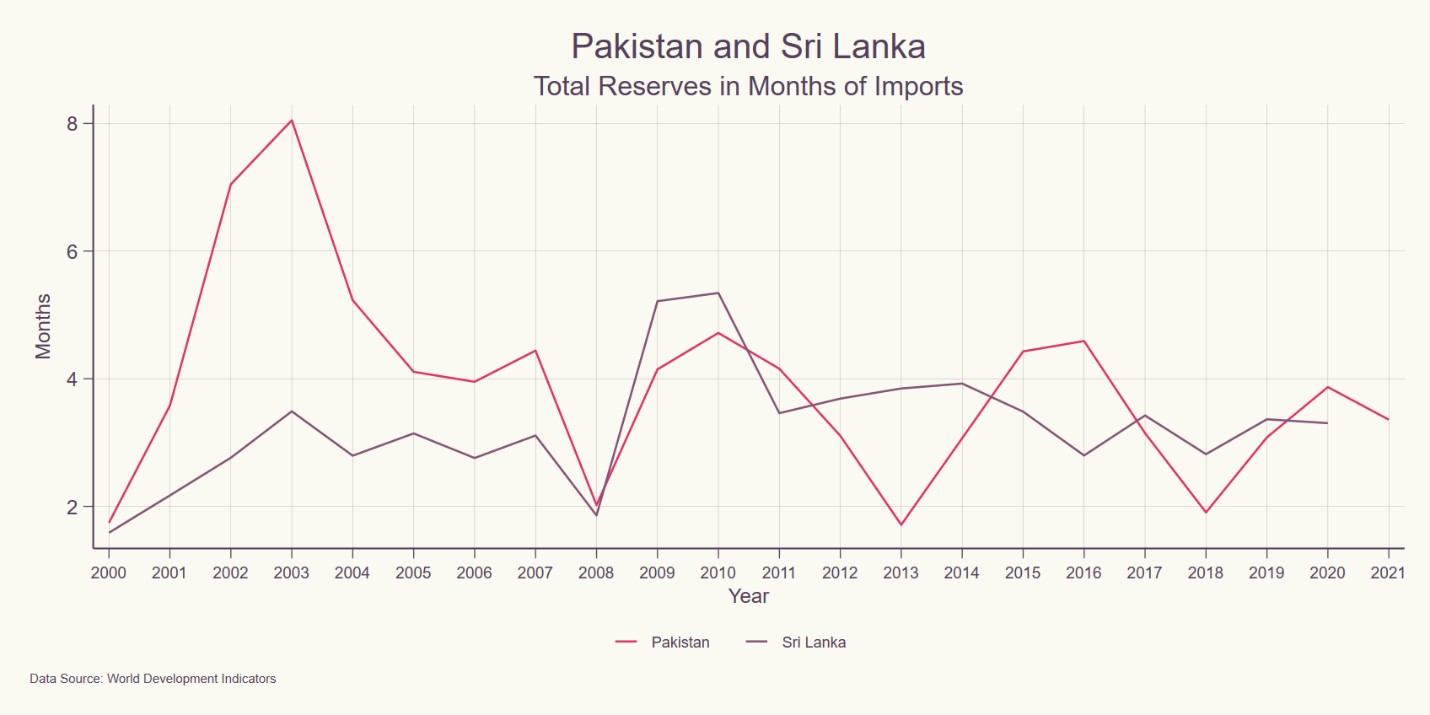 The figure shows that 2008 onwards, Pakistan has experienced a much more volatile cyclical depletion trend in its foreign exchange reserves compared with Sri Lanka. Periodically, Pakistan’s reserves keep going below two months of imports with improvements due to IMF bailout packages and other temporary measures taken by the government to build up reserves. So, without these temporary relief measures, the country could find itself with record low levels of reserves – something which could plunge it into even worse financial conditions: a lesson we can learn from the Sri Lankan experience. Sri Lanka only had reserves left for one month of imports in April 2022. Pakistan has periodically depleted reserves down to two months of import.

Foreign exchange reserves’ depletion also puts depreciation pressure on a country’s exchange rate. If we follow the trend in the PKR exchange rate (against USD), noticeable depreciation can be observed in 2008, 2013 and 2018 (Figure 4a) – periods when the country’s reserves ran very low. We see the same trend repeating itself during Pakistan’s current economic difficulties. Following the PKR exchange rate from January 1st 2022, there has been a depreciation from 178 PKR/USD to over 230 PKR/USD as of 15th September with fluctuations in between. 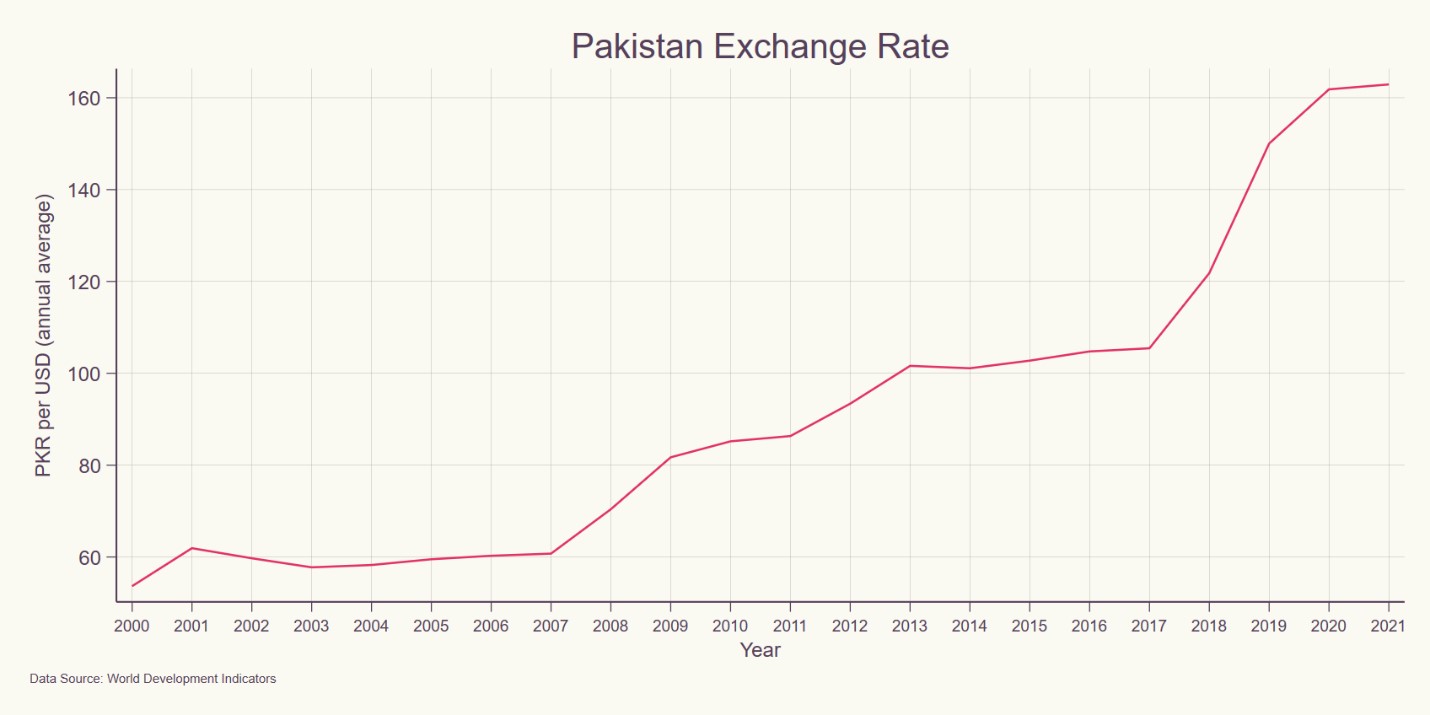 If we look at the Sri Lankan Rupee (LKR), a similar historic currency depreciation trend as Pakistan can be observed (Figure 4b). And more recently, during the economic crisis in March and April 2022, the LKR faced severe depreciation against the USD. By March 8th, the LKR stood at about 202 LKR/USD. By March 10th, in a span of just two days, it had jumped to 255 LKR/USD. Further depreciation followed in the days to come and by end April, the exchange rate was 355 LKR/USD. 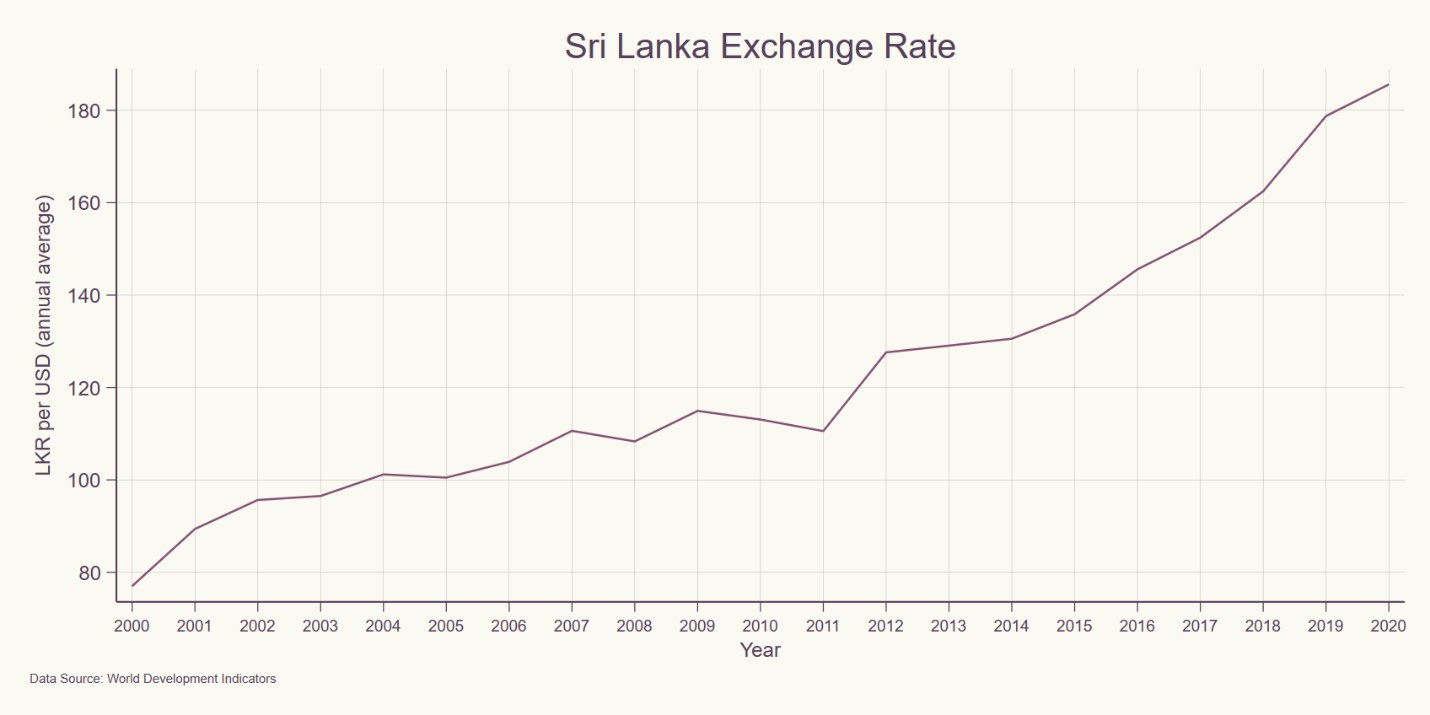 The depreciating exchange rate coupled with rising commodity and fuel prices in the world (triggered by the Russia-Ukraine war) raised inflation in Pakistan (Figure 5). 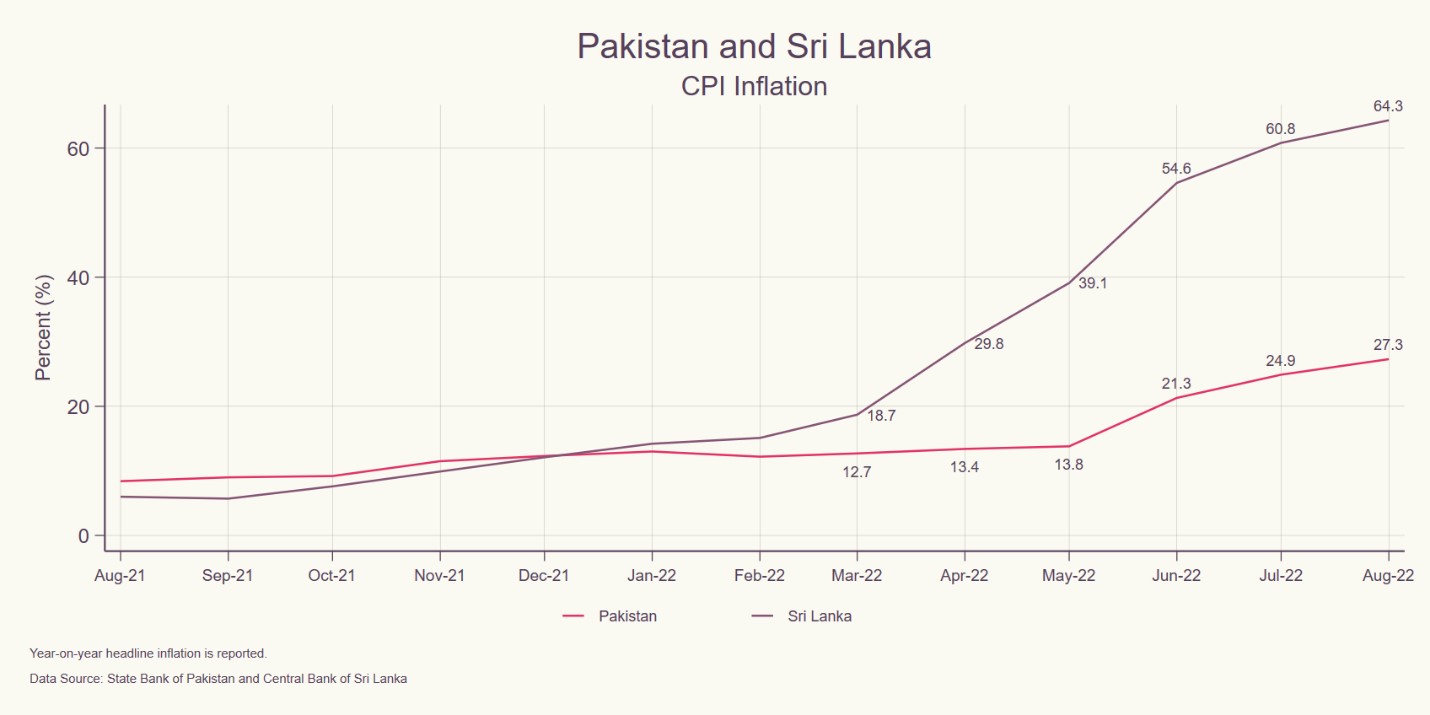 The macroeconomic indicators discussed above present undeniable parallels between Pakistan and Sri Lanka’s economic situations. Before its default, like Pakistan, Sri Lanka was also largely excluded from international capital markets. While Sri Lanka’s position is much more critical, Pakistan seems to be travelling the same course a few steps behind. In such circumstances, the country is particularly vulnerable to external shocks like the war in Ukraine or recent floods caused by climate change. It is vital at this juncture for policymakers to strengthen measures needed to bridge structural and political economy factors responsible for Pakistan’s recurrent macroeconomic problems.

On a sustainable solution front, particular attention needs to be paid to improvements to tax collection by broadening the tax base, which can help reduce the ever-widening fiscal deficit the country faces. This is essential for much needed development and infrastructure spending. Secondly, the country needs to promote and establish its export sector and move towards exporting high-value goods and services. This is essential for improving Pakistan’s current account problems and reducing reliance on remittances and foreign aid and loans for building foreign exchange reserves.

What is likely to happen, should Pakistan default? At a macroeconomic level, the country’s problems highlighted above will exacerbate manifold. Large and sudden exchange rate depreciation can be expected. This will be accompanied by very high inflation, shortages in fuel, medicine and other imports, as well as prolonged power blackouts. Economic growth will slow even further, and unemployment will rise sharply. Such a situation is likely to trigger further demonstrations, riots and a far more expanded political crisis than is currently persisting. The effects of these conditions will be worst felt by poorer segments of society with their livelihoods and purchasing power drastically diminished, and access to critical basic services like health acutely reduced.

Verda Arif is a  Teaching Fellow at LUMS

Rabia Khan is a Teaching Fellow at LUMS