Why did Covid-19 increase women’s care and housework in Pakistan?

Covid-19 lockdown measures resulted in an increase in care and housework in homes around the world. But with the greater presence of men at home as a result of lockdown and job losses, why are women disproportionately bearing the burden of unpaid care work and household chores? This latest analysis on the gendered experiences and impact of Covid-19 in Pakistan from the IDS-led Action for Empowerment and Accountability programme shares new insights from a recent household survey conducted with men and women in Lahore. 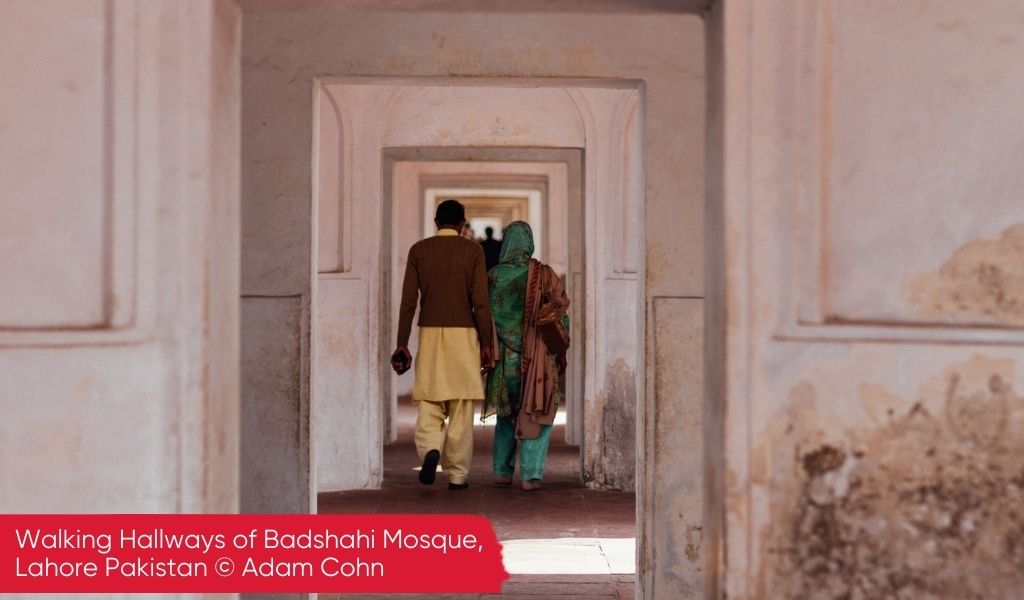 It has now become abundantly clear that the health and economic shocks of the Covid-19 pandemic have been accompanied by a worsening of gender inequalities (see evidence from Alon et al 2020, Kabeer, Razavi and Rodgers 2021, Mooi-Reci and Risman 2020). Women have disproportionately borne an increased burden of unpaid care and household chores. Many studies have examined this phenomenon in contexts where women’s labour force participation is significant, and the increased housework is accompanied by women either losing their jobs, reducing their work hours, or working from home.

But how have household dynamics shifted for women who were not part of the labour force and thus did not face the sorts of disruptions described above? In this blog, we will share our analysis of a phone-based survey conducted with men and women from nearly 1,500 households in Lahore to understand the immediate gendered impact of the pandemic in urban Pakistan as well as its long-term implications.

There are two reasons why we might expect women in Lahore not to face severe disruptions to their daily lives as a result of Covid-19.

First, 90 per cent of our respondents identified as housewives and did not experience job and income losses. In fact, only 42 women of a total of 1,457 surveyed said they had a job. This is not surprising and reflects the situation of the country in general – women’s labour force participation rate in urban Pakistan was only about 11 per cent before the pandemic and is unlikely to have shifted after it.

Second, while there is now more work to be done around the house than before the pandemic (for example, more cooking as there are more mouths to feed during the day), there are also now more people available at home. Men who previously left for work and children who headed to schools and colleges each day are now at home and available to take on household chores, help with schoolwork, and care for the elderly. Indeed, some studies have documented men devoting more hours to childcare and housework than they did pre-pandemic (see evidence from İlkkaracan and Memiş 2021, Sevilla and Smith 2020 among others).

An overwhelming majority (94 per cent) of households in our phone survey reported that men were now spending more time at home than usual because of lockdowns or job losses. What sort of impact do women in these households face, and do we see the gender gap in housework narrowing?

In Lahore, we find that women report an increase in housework. Seventy-nine per cent of women said that they were now spending more time cooking, cleaning, and caring for children and elders within the home than they did before the pandemic (see the graph below). Men also reported an increase in their housework burden, but compared to women, only 50 per cent of men said they now do more in their homes than they did pre-pandemic. In contrast, while only 20 per cent of women report no change in housework burdens, 48 per cent of men say that they have experienced no changes in what they do around the house since the pandemic started. 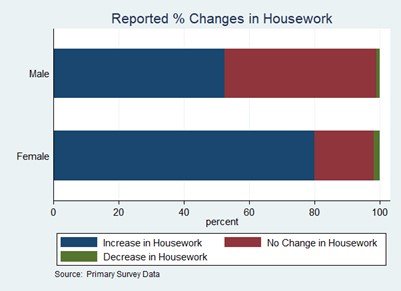 Men in these households may be doing more within the house than they did before, but they are clearly not sharing the burden of the increase in work equally, even if they are available at home to do so. The division of housework remains a deeply gendered phenomenon, and a significant gender gap in housework has emerged during the pandemic in urban Pakistan.

What is interesting, however, is that the gender gap in housework is associated with gender role attitudes held by men and women within the household. Our survey asked respondents whether they believe it is appropriate for women to work outside their homes. Respondents were able to select three options: 1) it is appropriate for women to seek paid employment outside their homes under any conditions; 2) appropriate only if there is financial need; or 3) not appropriate under any circumstances.

How should we think about our findings in a context where women’s increased burden at home does not come at the opportunity cost of labour force participation? This burden may nevertheless come at the cost of leisure and sleep for a population that is already severely deprived of it: time-use data shows that Pakistani women end up working more hours than men, regardless of employment status. Moreover, while our survey focused on adult women, the patterns replicate among school-going children: during the pandemic boys were more likely to be playing inside, while girls were spending time on household chores. A yet unacknowledged risk of starkly gendered divisions of labour is that if adult men do not step up to share in the increased burden of housework, it may be passed on to girl children.

As of May 2021, women’s burden of care-work was a focus of only 14 per cent of gender sensitive measures instituted by governments around the world in response to the pandemic. Our findings from Lahore, which may extend to other similarly patriarchal contexts, point to the need to design policy responses that explicitly account for the gendered division of labour within the home.