In their well-known publication, “Why Nations Fail”, Daron Acemoglu and James Robinson write “Inclusive economic institutions that enforce property rights, create a level playing field, and encourage investments in new technologies and skills are more conducive to economic growth”. Property right refers to an owner’s right to use a good or asset for consumption and/or income generation, including the right to transfer it to another entity. Property rights are a central constraint in economic decision-making because they shape the incentives of individuals to invest in the good or asset, use it for productive activity, and trade or lease it.

Even when property rights are defined, they may remain insecure in contexts with limited state capacity. What happens when property rights are not secure? Economists consider, broadly speaking, four mechanisms through which property rights matter. First, is the expropriation risk i.e. individuals may not enjoy the yield from their investment or effort. For instance, a farmer may realize that leaving land fallow will enhance long-term productivity, but the risk of land grabbers expropriating his land may deter him from making that investment. Second, insecure property rights may misallocate labor. Individuals might have to spend time defending their property, implying they cannot use that time elsewhere, e.g. in income generation. Third, insecure property rights may lead to the misallocation of assets itself. An individual owning farmland might not be a productive farmer and leasing the land to a productive farmer might be more efficient. However, the lack of well-defined property rights might prevent this trade. Last, property may be used as collateral to facilitate credit for productive use, however, non-verifiable property rights would obstruct the use of property in securing loans.

In a recent paper, I delve into the role of property rights in explaining the misallocation of land and labor, i.e. those factors of production not being used for their most productive purposes. The paper analyzes the effect of the computerization of agricultural land ownership and transaction records in Punjab on agricultural market activity and productivity. Land records had been maintained in the province under the patwar system since the pre-colonial period. Paper-based records of millions of landowners were held by 8,000 local officers or patwaris, who manually updated and managed these records. This decentralized land record system made land rights insecure by making owners reliant on the discretion of the patwaris for the record of transactions or the proof of ownership and tenancy rights. The opacity of the system made rights insecure because land records were susceptible to manipulation and this is likely to have adversely affected land use and labor market choices of rural landowners. 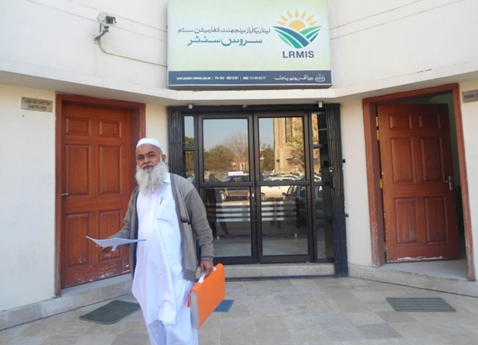 Through Punjab Government’s Land Records Management Information System program, land records were obtained from the patwaris, computerized, and made available to landholders upon request at a service center in each subdistrict (Figure 1). An owner or tenant can go to the designated center and obtain a government-attested copy of his ownership or tenancy status, implying improved access to land records and security of rights due to the program. All land transactions and changes to ownership or tenancy are conducted digitally at this designated center. The program thus represents a shift from a decentralized to a centralized and computerized system that is more transparent. The paper uses the staggered rollout of the program between 2011 and 2015 (Figure 2) to document the effects of the program on land market activity, labor allocation, and agricultural efficiency and production. Essentially the research design compares changes in these outcomes for districts that got the program sooner to those that got it later, controlling for across-district and over-time differences. 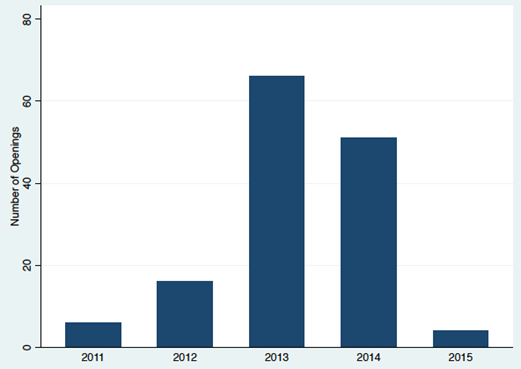 The paper finds that the introduction of land computerization increased rental market transactions, indicating a greater buoyancy in land tenancy markets. Consistent with higher rental activity, the rate of agricultural participation by landowners declines. Landowning households instead shift into non-agricultural occupations, particularly business ownership. While some landowners rent out land and exit agriculture. Households that continue to cultivate increase the scale of farming as shown by more rented in land and higher average farm size as a result of the program. Overall, the findings support the hypothesis that markets work better due to the computerization of land records, and this results in a more efficient allocation of land in favour of productive farmers.

The paper makes a significant contribution to the understanding of structural change in the context of South Asia and highlights the substantial promise that the introduction of Information and Communication Technology (ICT) in governance and public service delivery offers for lower-income nations with limited state capacity.

Sabrin Beg is Assistant Professor of Economics at University of Delaware