There remains an overwhelming need to reduce the gender gap in labor force participation rates in Pakistan. As of 2021, women’s participation rates remain at around 22 pc with the country recording the slowest progress in closing the gender gap in the Economic Participation and Opportunity Index in the region, barring Afghanistan. This is despite repeated commitments by successive governments in Pakistan to raise women’s labor force participation rates – see for example Vision 2025. These pledges sit alongside renewed emphasis by various markets to close gender gaps in access – here microloans for women and the rising significance of the woman micro-entrepreneur sub-population come to mind. So, why do we continue to perform so poorly in this metric?

A major reason is that interventions remain disconnected from real issues that keep women from engaging systematically with the labor market. There has been considerable research into the barriers to women labor force participation (LFP), particularly when it comes to the formal sector which has been shown to have the greatest empowering potential. Here, women’s mobility restrictions, reproductive burdens, and limited networks have all been highlighted (see this IGC blog for a brief discussion on some of these points). At the same time, we also know that women’s educational achievement and training significantly affects their ability to effectively participate in the formal labor market.

But how big of an issue is this in the Pakistan context? And do women really see the dividends of education in improved employment rates? In this blog we explore how education levels intersect with women’s labor force participation rates in Pakistan. We also highlight time trends in sectoral participation rates by education levels. Throughout, we make use of all rounds of the Pakistan Labor Force Survey (LFS) available between 1990 and 2015.

Before turning to examining trends in women’s LFP at different education levels, we first establish the changes in education observed in the LFS. The education graphs below represent segments of illiterate and literate populations. The literate population is further broken down by the level of education. To get a breakdown of these levels the question, ‘What is the educational level?’, is used. Illiteracy rate refers to all those persons ten years of age and above who cannot read and write in any language with understanding, as a percentage of the population that is ten years and older.

The first point to note is that the LFS does not record highest education achieved in terms of years but rather reports the level – primary, secondary etc. Figure 1 shows that overall, there has been a downward trend in illiteracy levels, and that there have been improvements in the educational levels of the population. 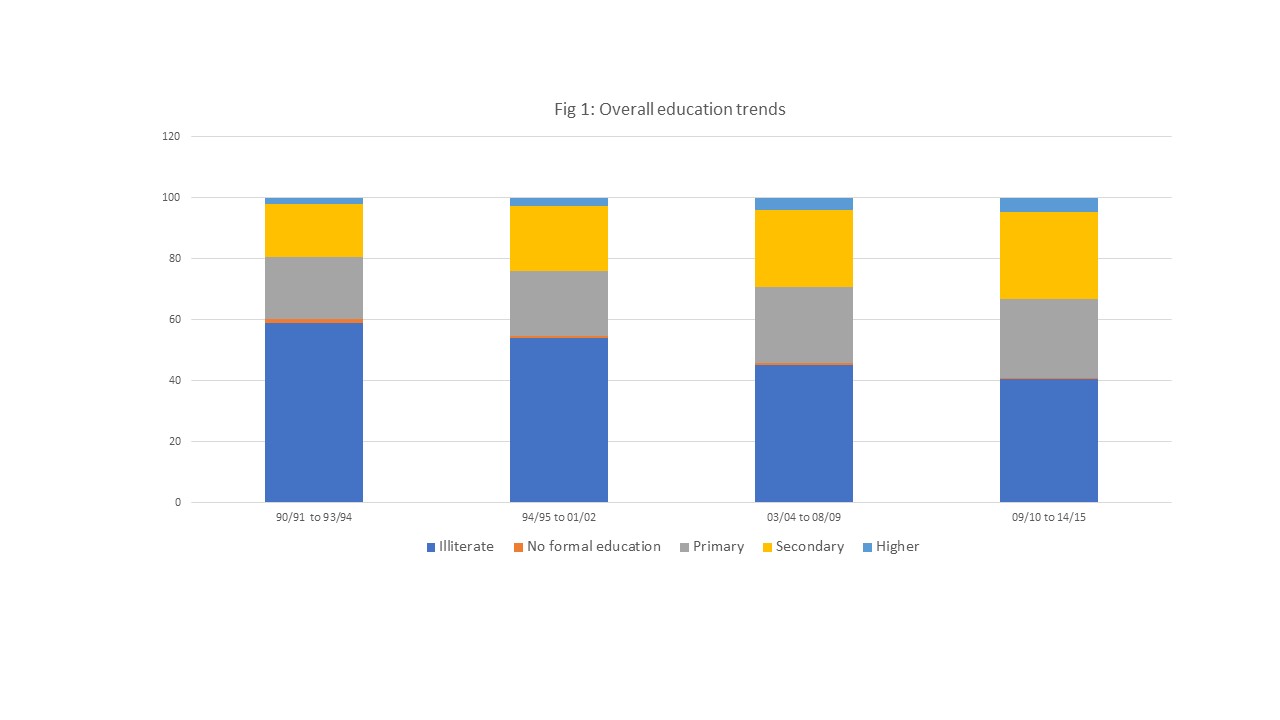 Yet Figure 2 shows that there remains a substantial gap between male and female educational levels with men continuing to outperform women for all levels considered here. Moreover, while the percentage of female secondary school attainment has doubled in the last 25 years, a rate of increase not matched by any other level of education, the gender gap for this level of education has still not closed. While this suggests some improvements in the supply of secondary school education for women, it is also indicative that demand-side constraints remain. Moreover, the trends for this level imply that while the returns to secondary schooling have likely seen the highest growth in Pakistan’s labor market, the market for women with secondary schooling is still fairly underdeveloped when compared to that for men. 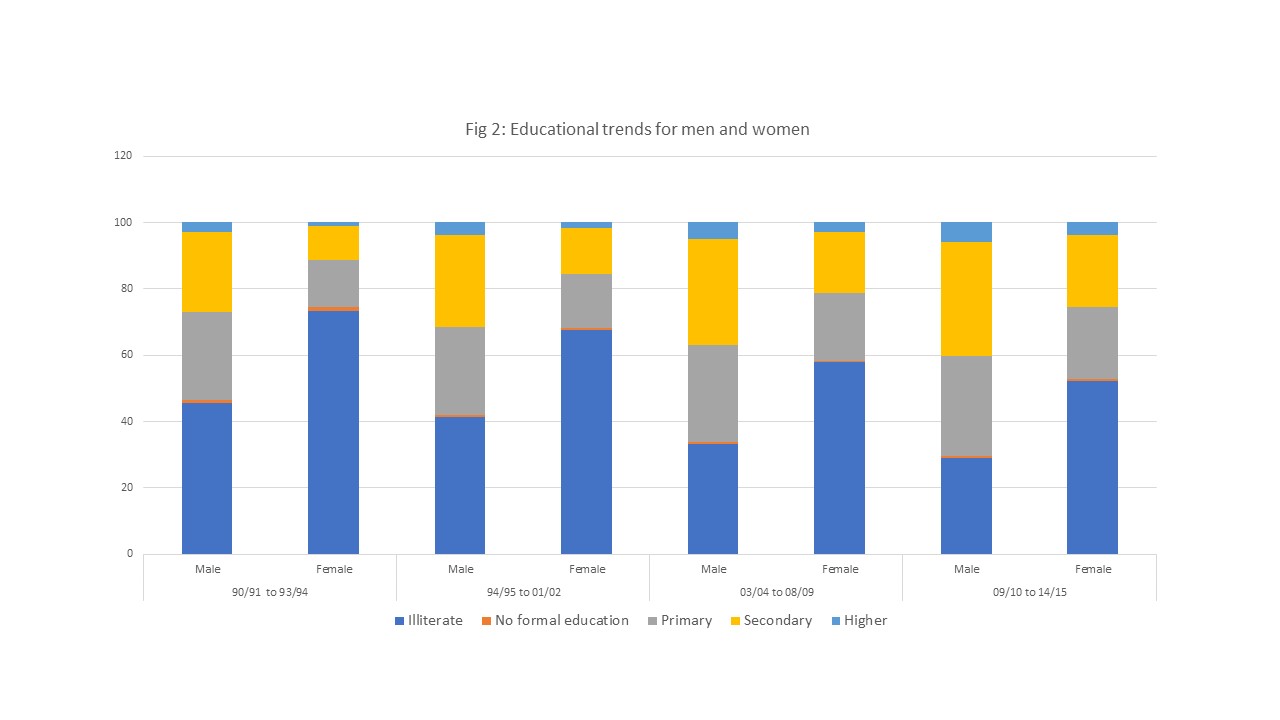 Indeed, a closer look at female labor force participation (FLFP) rates at different levels of education follows a skewed U-shaped pattern in Pakistan (Figure 3). Women with no formal education are participating at rates of about 21 percent on average, whereas the returns to primary and middle school graduates are minimal in the female labor market. Finally, while those with only secondary school qualification (matriculation) are seeing higher success in terms of labor force participation rates than those with primary or middle school achievement, participation rates peak at an average of only 32 percent for those with a bachelor’s degree or higher levels of education. 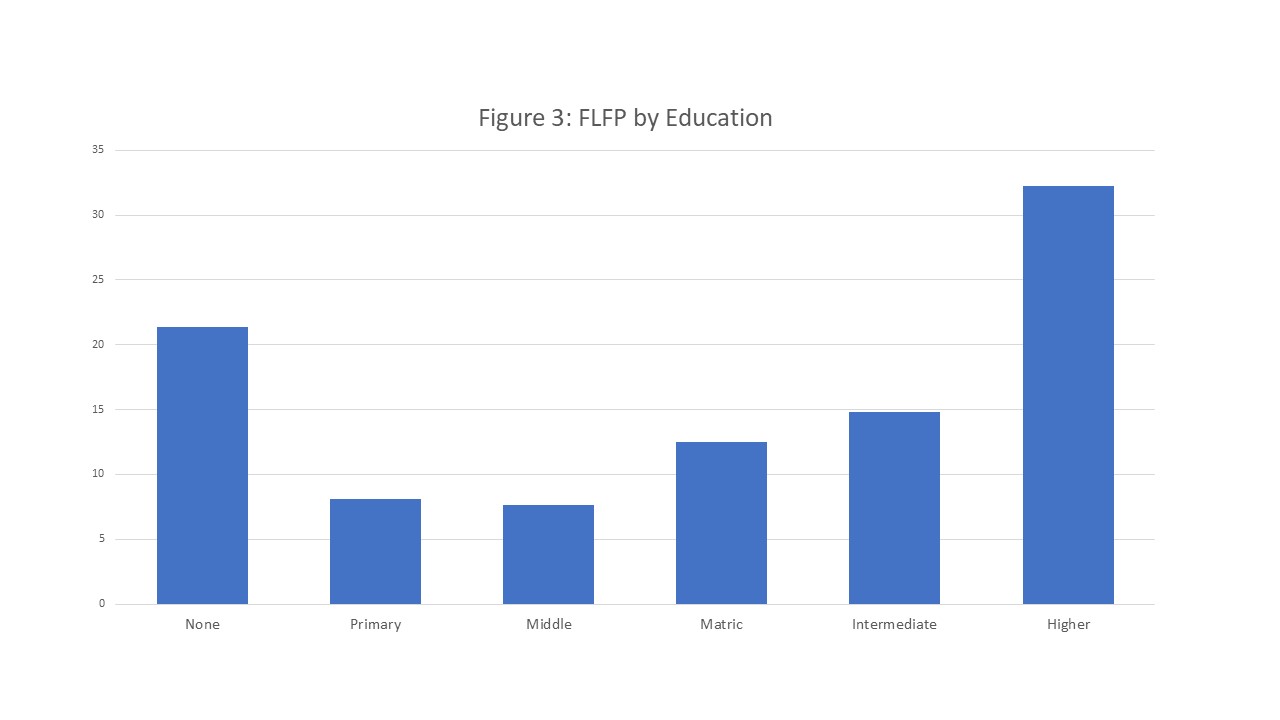 These overall low rates are of concern, particularly at higher levels of education. One possible explanation could be that more educated women are opting out of the labor market. Part of this is because of gender wage gaps, with men earning more in every educational category (Figure 4) and in every occupational category too. 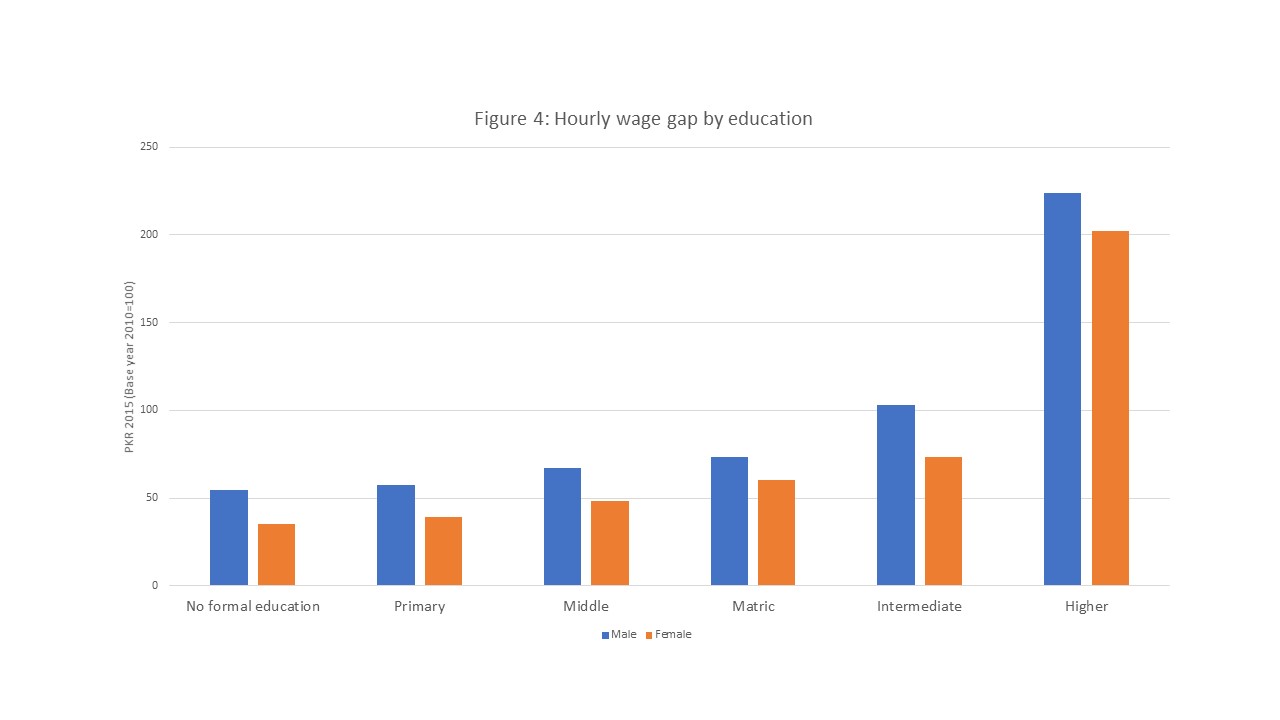 While differences in experience levels may explain some of this gap, discrimination forms the other part of the story. Women occupy a secondary status in Pakistan’s labor market and are the first to be laid off during crises. Add to this a hostile work environment, and more educated women who are ostensibly from relatively higher income households, may well be opting out of the labor market leading to the overall lower participation levels that we find.

What is of special interest is the case of women with no formal education. Sectoral disaggregation shows that the highest percentage of women participants in both the agriculture and manufacturing sectors remains those without any education (Figures 5 and 6). 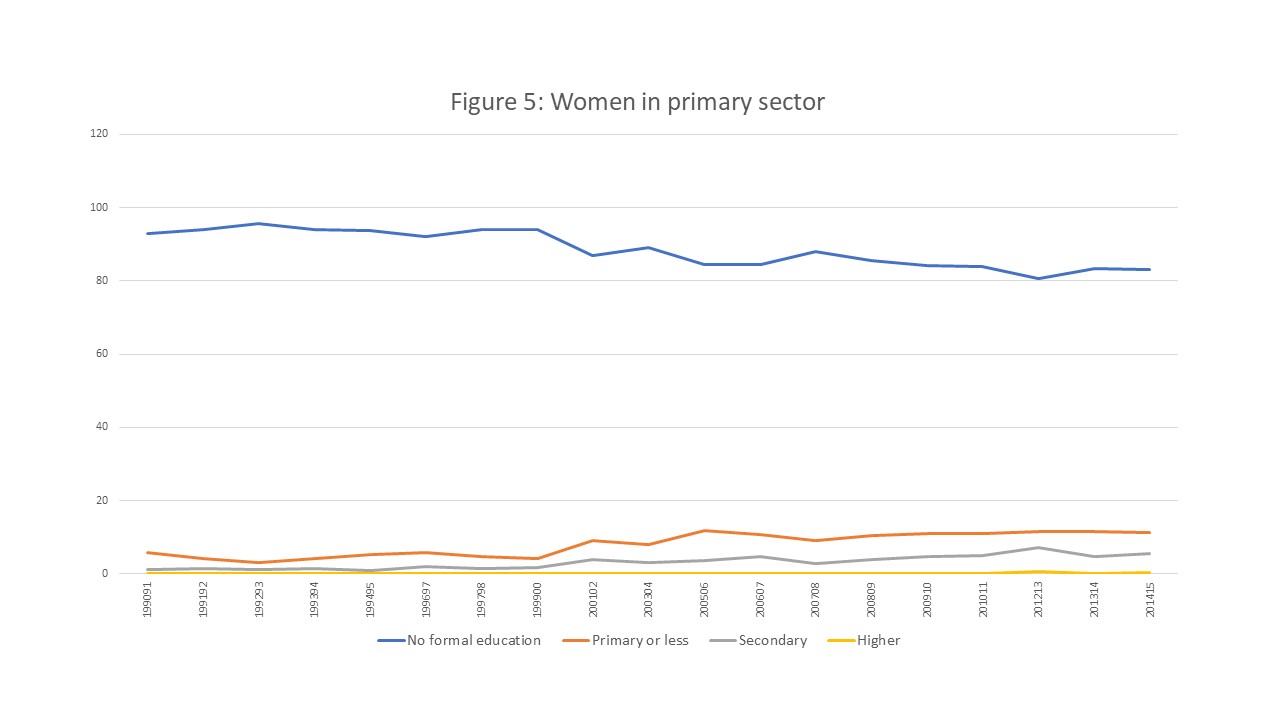 The details from agriculture are unsurprising. Not only does the sector see the highest concentration of women – an average of nearly 70 percent of women who work do so in the primary sector for the 25-year period considered here – but women tend to work on family farms where nearly 80 percent work without any compensation. In essence then, the agriculture sector seems to be acting as a reservoir for women where particularly an older, less educated cohort works.

From Figure 6 we can see that there is a significant downward time trend – as the participation of women with no educational achievement has gone down, that of women with primary and/or secondary has increased. The break seems to have occurred in the mid-90s when trade liberalization began in earnest and the demand for more skilled workers likely amped up.

In contrast to both the primary and secondary sectors, the tertiary sector has seen a systematic decline in the participation rates of women with no formal education. Interestingly, there also seems to be a low, flat trend in this sector of women with education levels at the 5th grade and below. Finally, while there was a gradual build-up of secondary, 12th grade, and post-secondary school graduates in the sector, post-2003 participation by secondary school graduates declines with those with more than 12 years of education coming to dominate the sector from 2010 onward (aligning with the expansion of the service industry and the gig economy). 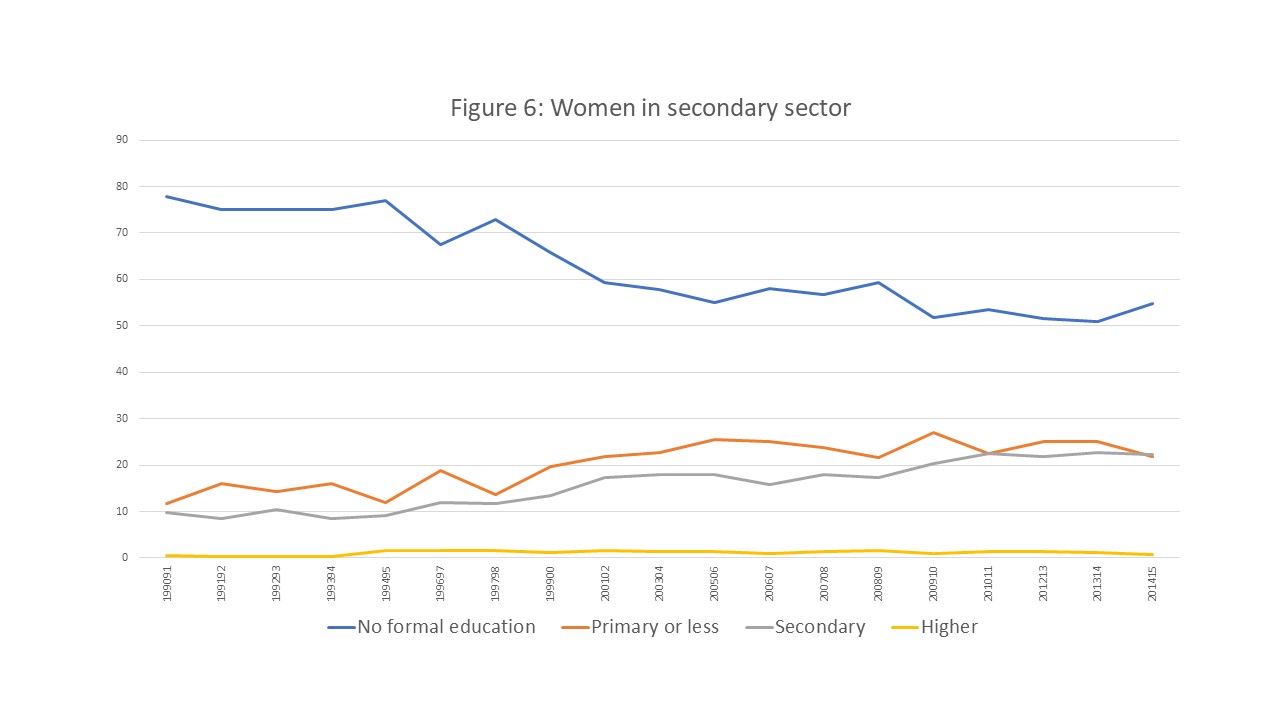 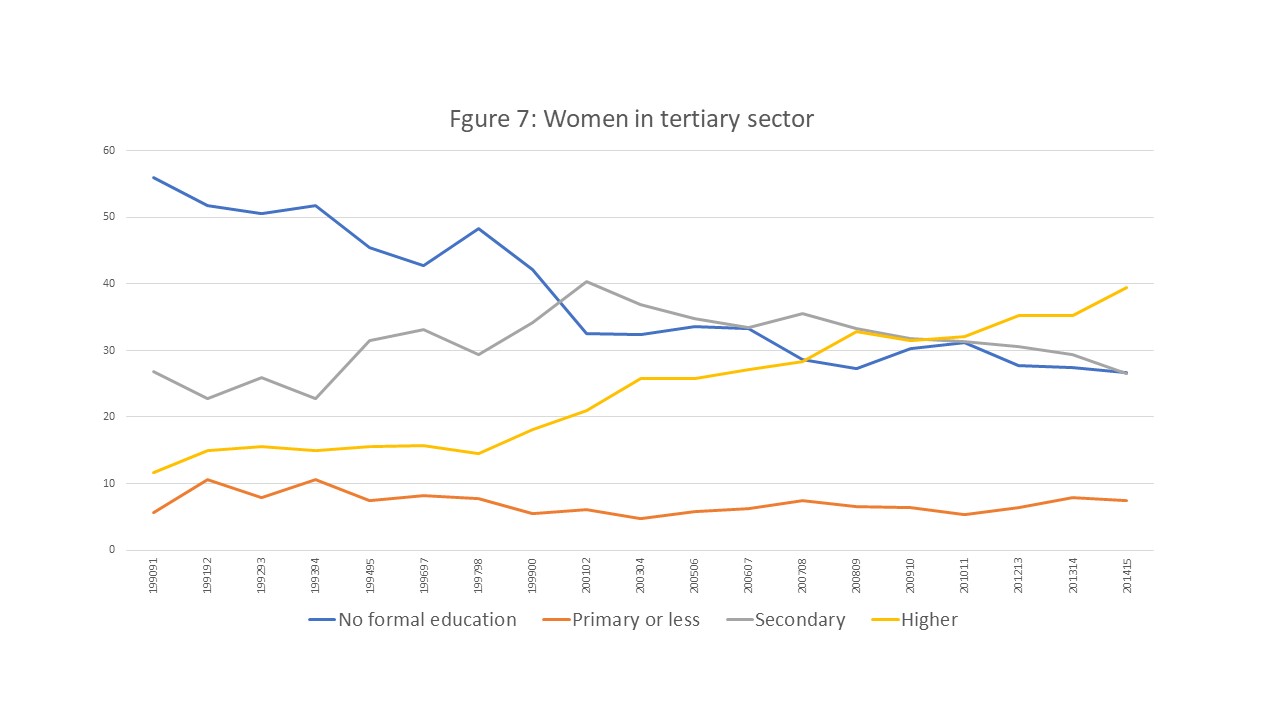 Taken together, the analysis presented here indicates a gradual build-up of demand for more educated women workers in the higher paying manufacturing and services sectors. While this is good news, since it is jobs in these sectors that arguably carry greater empowering potential, there remains considerable cause for concern. Among this is the high incidence of casual contracts especially in the manufacturing sector. There has generally been a greater casualization of the workforce the world over and Pakistan has been no exception – only about 10 percent of women workers in the manufacturing sector describe their status as regular employees. This incidence tends to increase dramatically the lower the woman’s education level, which in turn points to another significant issue. There is a rising inequality between the better-educated younger and the lower-educated older cohorts of women workers where the latter are the primary drivers of the rising feminization of agriculture in Pakistan.

What is the way forward? Continued reductions in gender inequality in educational outcomes remain a priority. However, while this will ensure that our younger generations are equipped for the rising demand in higher skill sectors, what about the older cohorts? For them, skills training becomes more relevant. Yet, not everyone may be able to, or even want to, move sectors. Here then, within each sector, we must look to improve workers’ rights while reducing gender discrimination.

Particularly within agriculture, rights advocacy to ensure agricultural women workers’ recognition, their inclusion in communal governance structures, measures that their work is properly remunerated, even land markets that enable women’s ownership of agricultural land are all steps that need to be taken. Similarly in manufacturing and services, curtailment of casual contracts and improvements in worker benefits and safety regulations need to occur to name just a few.

In the end, a concerted push needs to be made to move beyond the current dominant narrative that considers women’s work as ‘survival jobs’ taken up to support the household and not careers in their own right. It is only once we normalize women’s presence in the workplace across all sectors that we can make true progress in improving women’s economic participation and access to opportunities.

Syeda Warda Riaz is a PhD Student at UC-Davis.