Where does Pakistan’s electricity go?

A previous version of this post appeared on Dawn Prism titled The Analytical Angle: Addressing the woes of Pakistan’s electricity distribution sector.

Electricity is the wheel that drives all facets of our daily lives such as production, consumption, communication, transportation and routine financial transactions. Despite its key role in powering the national economy, Pakistan’s electricity sector continues its struggle with significant challenges. Whether these manifest as costly energy production, overloaded infrastructure, high transmission and distribution losses, extraordinary load shedding, or mounting circular debt, they are all evidence of a bad equilibrium that entails unreliable and poor quality of electricity provision.

Despite the attention given to this sector by every government, why have we not been able to emerge from this bad equilibrium? A major reason for the continued woes of the electricity sector is that past reforms have been short-sighted and typically provided band-aid solutions. In 1994, following the policy prescriptions of the Washington Consensus, the government allowed private sector entry into generation and subsequently unbundled the monolithic WAPDA. The objective was to improve operational efficiency of generation, transmission and distribution by creating professionally managed companies. In 2005, electricity provision in Karachi was privatised to bring about a financial turnaround, and a vertically integrated private utility now known as Karachi Electric (KE) was created. Under CPEC agreements, a large amount of generation capacity was added without upgrading transmission and distribution. None of these reforms were successful in bringing about the envisioned improvement in efficiency or service delivery. Rather, we continue to experience rising costs of provision and persistent load shedding.

While challenges to the generation sector are hugely important, in this post we focus on distortions in the distribution sector, drawing upon findings from our recent research. We use two features of the distribution system to summarise performance: (i) technical and distribution (T&D) losses which is the fraction of electricity lost due to technical (engineering) reasons and unmetered consumption or theft, and (ii) revenue recovery ratio which is the fraction of bills paid by consumers. Figures 1 and 2 show the trend in these measures over the past eight years. 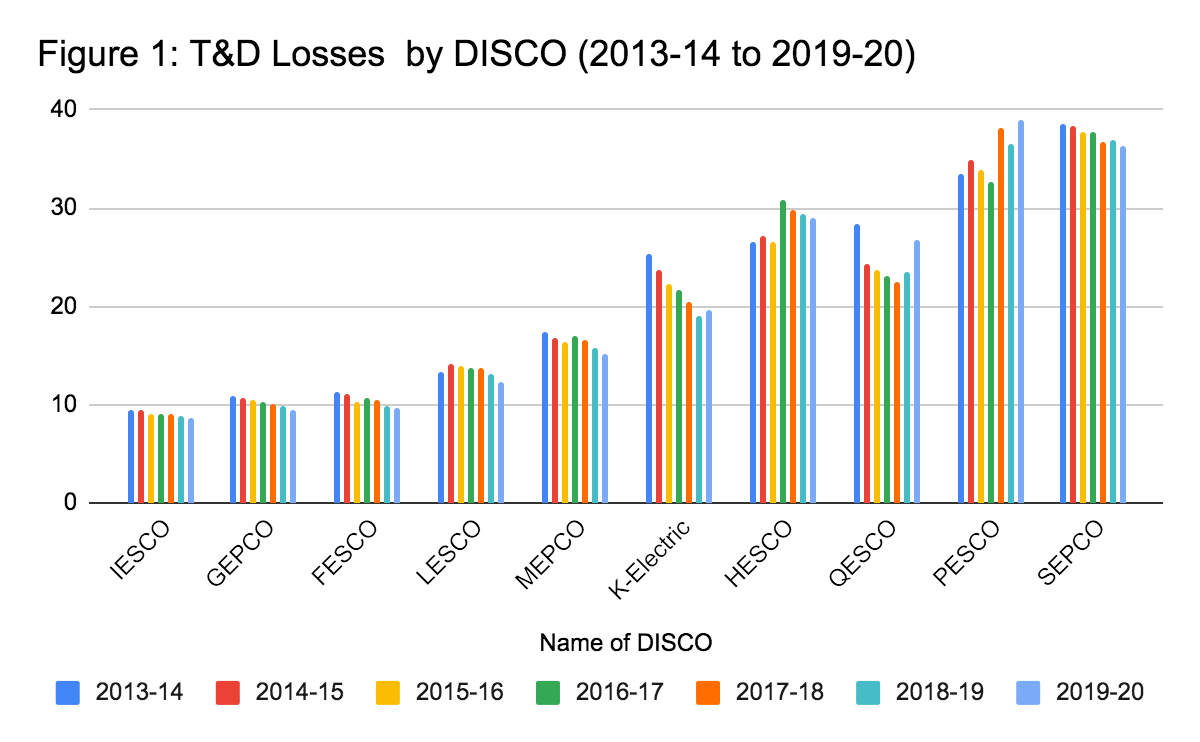 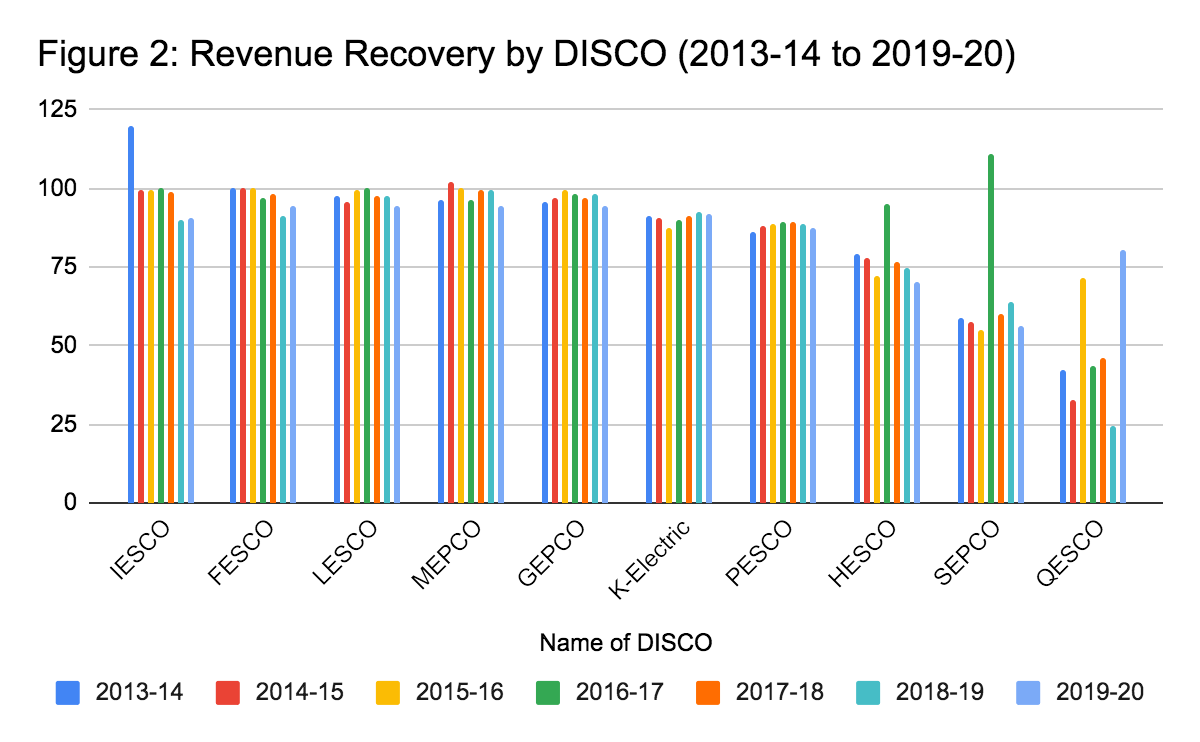 Except for three out of four distribution companies in Punjab (FESCO, GEPCO and LESCO) and for IESCO, T&D losses for all other companies in the country are above 15%. In 2019-20 these losses were highest at 38.9% for PESCO, followed by 36.3% for SEPCO. The best performing companies (FESCO and IESCO) have losses below 10%. Revenue recovery rates are above 94% for all distribution companies (DISCOs) in Punjab, but fall significantly as we move to DISCOs in Sindh, Balochistan and KP. Together, the electricity lost and unpaid bills translate into billions of rupees of losses for the DISCOs every year. It is therefore unsurprising that these bodies remain unable to make sizable investments in the upgradation of their infrastructure.

Furthermore, we observe wide dispersion in T& D losses and revenue recovery rates even within distribution companies. For instance, using monthly feeder line data from Karachi Electric, we find that areas such as Defence, Clifton, Bahdurabad have T&D losses below 15% and a revenue recovery rate of 94%, but areas such as Surjani, Korangi and Landhi lose 30% electricity due to T&D losses and experience revenue recovery rates of 80%. Such wide dispersions in performance cannot be attributed to poor infrastructure alone. They partly reflect variation in customer profiles, usage and payment behaviors, and the norms related to the acceptability of using electricity without paying for it.

There is visible evidence of electricity theft in large cities especially in the provinces of Sindh, KP and Balochistan. Illegally hooked wires (kunda, in Urdu) connected to the main cables (leading to the Pole Mounted Transformers (PMT)) or service cables (leading from PMT to the customer) are a common sight in many densely populated areas. Meter tampering is another common way to use electricity illegally. Although it is difficult to derive a precise estimate of the fraction of electricity lost due to theft, T&D losses above the level of the best performing distribution company provide a reasonable approximation. The usual methods of stealing electricity involve meter tampering and illegal hooking of wires (kunda, in Urdu) to the main line from pole-mounted transformers (PMT) leading to customer meters. Such sights of illegal connections are quite visible in densely populated areas of cities with high T&D losses.

What has been done to improve distribution performance? DISCOs have faced pressure from the regulator to bring down T&D losses and improve recoveries, which is reflected in falling T&D losses and rising recovery ratios for most companies (as shown in Figures 1 and 2). The segmented load shedding policy – first introduced by KE – adopted by all DISCOs implements increasing load shedding based on past feeder line losses. Although this policy has saved money, it is often perceived as unfair by customers, which creates significant resentment towards utilities, leading to lack of trust in the utility, protests and even deliberate damage to infrastructure. There has also been a push to implement technological solutions such as aerial bundled cables (ABC), smart-phone metering, and smart meters to make it difficult for customers to use electricity illegally. However, these solutions are costly to implement, often require donor assistance, and face resistance both from employees and customers, who quickly find new ways to circumvent these technologies.

An important gap in the knowledge of electricity reform is Pakistani consumer behaviour. Why are customers unwilling or unable to pay for the electricity they use? In this context, we are evaluating the results of an ongoing program of Karachi Electric which is underway in the high loss Integrated Business Centers (IBCs) of Karachi. The high loss areas of KE such as Korangi, Landhi, Surjani and Orangi cover approximately 40% of the metered customer base. Since 2018, these IBCs have an average T& D loss of 30% and revenue recovery rate of 80%.

In November 2019, KE initiated the ambitious Project Sarbulandi in six of twelve high loss IBCs to improve their performance. In addition to increasing the coverage of ABC cables in areas previously steeped in kunda culture, KE introduced several innovative and complementary program features, such as counselling local influentials to gain their support; gaining confidence of people to meter the unmetered; as well as community engagement and facilitation for winning the trust of customers. These initiatives were enabled by empowering IBC management with authority and resources to determine the best strategies for their areas based on local conditions, and then holding them accountable through close monitoring.

Project Sarbulandi delivered phenomenal results in the first four months of its rollout, especially in improving bill recovery. In Figures 3 and 4 we show the T&D loss and recovery ratios of Sarbulandi IBCs relative to the remaining six high-loss IBCs. When the COVID-19 pandemic hit in March 2020, T&D losses rose in all high-loss IBCs, but less so in Sarbulandi IBCs. There were no observable differences in recovery rates, despite Sarbulandi IBCs having brought a large number of previously non-paying customers into the metered network. These initiatives have now been scaled to remaining high-loss IBCs of Karachi.

While part of Sarbulandi success appears to be due to improved infrastructure – which makes it difficult to steal – it remains to be seen to what extent the program worked by changing the willingness of customers to pay for electricity. This is the next step in our research, which will involve conducting customer surveys to understand factors driving illegal electricity usage and bill payment behaviors in these areas. 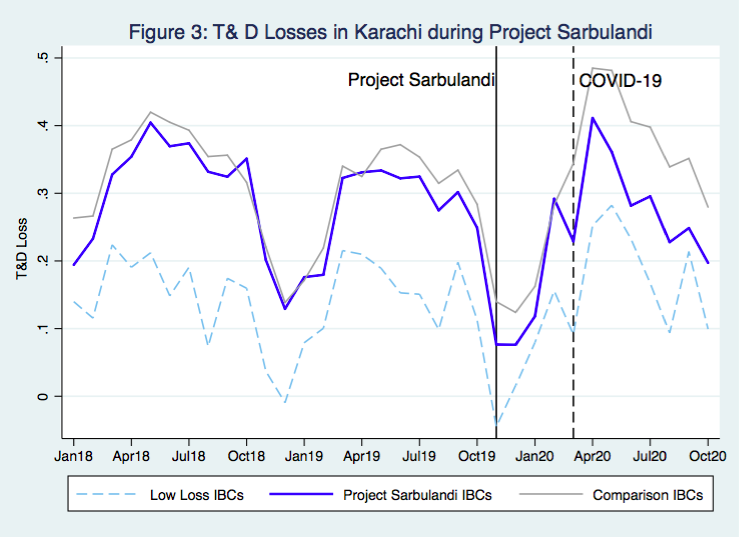 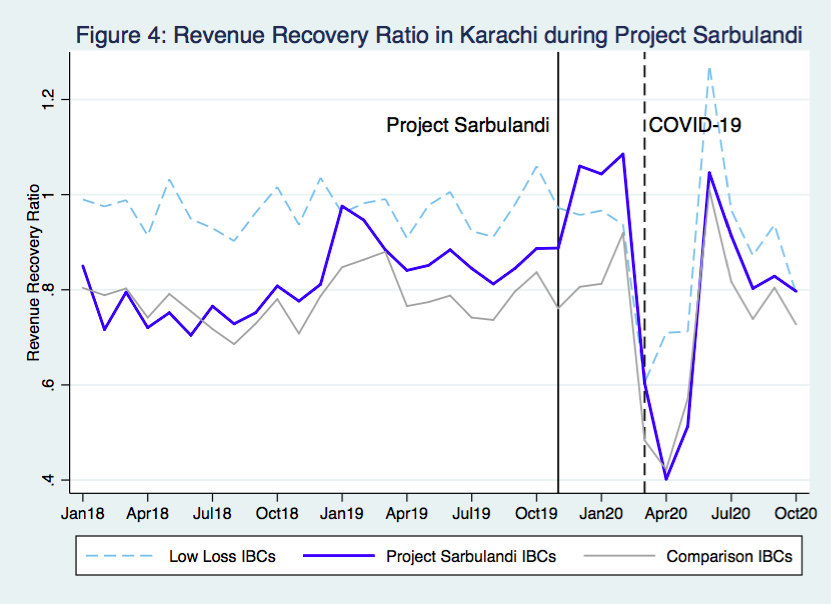 The experience of Project Sarbulandi illustrates the promise of complementary approaches – which simultaneously bring about infrastructure improvements to make it difficult to steal electricity while increasing the consumer’s willing to pay for electricity. It also highlights the need for using data to identify and address demand-side distortions, one of several fundamental reasons for high losses in this sector. Consumer behavior will ultimately determine the effectiveness of any reform program. Unless informed and creative ways are sought to break the culture of theft and non-payment, those who want to steal electricity will continue inventing new ways to do so.

Javed Younas, Professor of Economics at AUS and Research Fellow at CERP